Revisiting the Landmark books after ~50 years 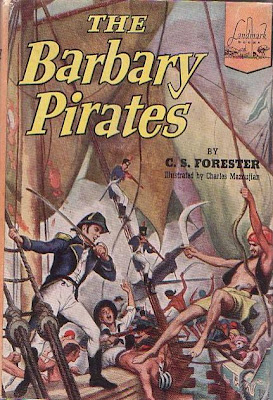 Somewhere in one of our family photo albums is a picture of me as a child, curled up in a comfy chair reading The Barbary Pirates from the Landmark series.  I had a modest degree of impairment from the 1952 polio epidemic, which limited my participation in athletics, so as a youngster I spent a lot of time reading - a habit that was encouraged by the school I attended which gave us reading lists for every summer vacation.

The books I remember best were from the Landmark series, so on a whim this past week I obtained three of them from our local library.  I started with The Barbary Pirates, and noted for the first time that the author was C. S. Forester - a name that would have meant nothing to me in the 1950s, but now one that I recognize as the author of the Horatio Hornblower series and The African Queen.  It's interesting that in the midst of that successful career he then took time to write a book for youngsters.  Rereading it now, I was again impressed.  It began with a history of the Barbary ("Berber") coast and a lucent explanation of why the U.S., which had just then become an independent nation, chose to get involved in naval warfare clear across the Atlantic.  He then described selected naval actions and brief bios of relevant personnel.  I read it in just a couple hours and decided it was a reasonably sophisticated book for a junior high school student.

Then I read Kit Carson and the Wild Frontier, written for seemingly a slightly lower grade level.  With my adult perspective, some of the aspects of his biography were less "heroic" than they would have appeared in the 1950s.  Carson started his career trapping beaver in Mexican territory (breaking an international treaty), bribed a local government official to do so, then trapped beaver on Indian land, then slaughtered bison including white ones (!) to make a showy tepee for his wife, and got an Arapaho woman "servant" (slave?) for her.  He was unable to read or write his name, money "meant nothing to him" so he spent it in sprees on return to towns, and his second wife was 15 years old.  He finished his career helping Fremont instigate sedition among the California settlers to overthrow their local government, then drove the Navaho out of Canyon de Chelly using a scorched earth policy destroying their corn fields and slaughtering their herds.  A true "American hero."

The third book was Andrew Carnegie and the Age of Steel.  Straightforward linear biography, written for an even younger target audience, so I zoomed through the whole book in an hour.  But I learned stuff, because I had never read anything about him before that.  I suppose to be quite pragmatic about it, I could have learned more from expending the same hour at Wikipedia and a few linked sites, but I did wind up with an understanding of why the Landmark books made such an impression on me as a child.

There were two Landmark series.  The main one covered U.S. history and biographies of Americans; those 122 books are listed at Library Thing.  The other was a World Landmark series; those 63 titles are listed at Bibliomania.  If you know a young person with an inquisitive mind and an interest in history, these books are not a bad place for him/her to explore.