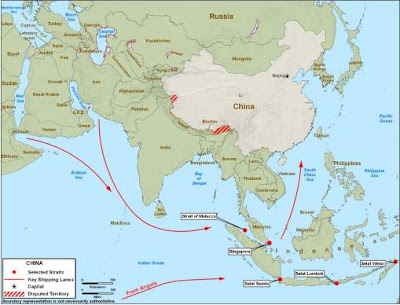 It is common knowledge that China exerts substantial influence worldwide in economic terms.  Now the country has announced that it is considering setting up overseas military bases.

China develops its military force with a theme of peace in mind. Therefore, we can either develop military forces domestically to maintain peace, or place the forces abroad as long as we take world peace as the ultimate goal...

The first overseas location to be established will probably be in Pakistan:


"It is baseless to say that we will not set up any military bases in future because we have never sent troops abroad," an article published on Thursday at a Chinese government website said. "It is our right," the article said and went on to suggest that it would be done in the neighborhood, possibly Pakistan...

China has helped Pakistan in modernization of its armed forces by supplying latest fighter planes and frigates besides forging close partnership between the armies of the two countries.

In addition to enhancing their ability to monitor and influence Muslim Uigher separatists on the western margins of China, the Pakistani location would also be crucial in protecting China's interest in Middle East oil.

Via Reddit, where there is a good discussion thread on this subject.

Image credit via Lucky Bogey's Blog, which has several posts relevant to this subject.