The megaflood of the Mediterranean 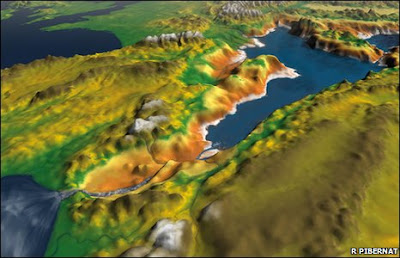 It was called the "Zanclean flood" because it occurred during that time interval about 5 million years ago.  The waters of the Atlantic ocean broke through the land barrier that joined Gibraltar to Africa, spilling into what at the time was the "Mediterranean desert" (see this link on the Messinian salinity crisis).

Last month the BBC reported some new research into the event.


Using existing borehole and seismic data, his team showed how the flood would have begun with water spilling over a sill. The water would have gradually eroded a channel into the strait, eventually triggering a catastrophic flood, Dr Garcia-Castellanos explained.

He and his colleagues created a computer model to estimate the duration of the flood, and found that, when the "incision channel" reached a critical depth, the water flow sped up. In a period ranging from a few months to two years, the scientists say that 90% of the water was transferred into the basin.


That must have been something to see.  Wish I could have been there to watch.  It's very similar to the Ryan-Pitman deluge theory about the filling of the Black Sea from the Mediterranean.

And one related interesting item.  Someone has proposed reestablishing that land bridge between Gibraltar and Africa, letting the level of the Mediterranean fall, and then letting the water back in through an enormous dam that would create gazillions of megawatts of electricity.  It would create a lot of new land (but it would trash some famous beaches - and Venice).  Read about it here.