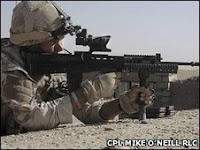 A contractor supplying guns to U.S. and British military personnel has been inscribing references to Bible passages on the gunsights.


The markings include "2COR4:6" and "JN8:12", relating to verses in the books of Corinthians II and John.  Trijicon, the US-based manufacturer, was founded by a devout Christian, and says it runs to "Biblical standards".

But military officials in the US and UK have expressed concern over the way the markings will be perceived.

The company has added the references to its sights for many years... "As part of our faith and our belief in service to our country, Trijicon has put scripture references on our products for more than two decades.

The issue has been thrust into the spotlight by the US Military Religious Freedom Foundation (MRFF) - an advocacy group that seeks to preserve the separation of church and state in the military.  On 14 January, the MRFF received an e-mail, purportedly from a Muslim US Army infantryman, complaining about the markings.

"Many soldiers know of them and are very confused as to why they are there and what it is supposed to mean... Everyone is worried that if they were captured in combat that the enemy would use the Bible quotes against them in captivity or some other form of propaganda."


The cited passages from  II Corinthians II don't seem to be war-related.  There are many more bellicose examples they could have chosen, such as Luke 19:27 or Isaiah 13:15.