First thing let's do, let's... cut down all the trees

The photo above is labelled "Clearing in 'Ireland'", with the latter in quotes.  It comes from the William James Topley collection at the Library and Archives Canada.  Based on the source and the tree stumps in the background, the "Ireland" referred to here must be a community in Canada, not the mother country of Ireland.

It's quite a remarkable scene.  The man in front of the cabin has presumably been involved in the clearing of a vast area of forest, perhaps for a farm, or for the commercial harvesting of the timber.    Nowadays Americans (and presumably Canadians) tend to decry the clear-cutting of the Amazon, neglectful of (or ignorant of) the fact that their own homes and businesses are situated where once vast forests stood.   I know this happened in northern Minnesota in a virtual ecologic holocaust when the stands of white pine were first harvested in the late 19th century.

This photo came from the Flickr photostream of the Library and Archives Canada, in a subset labeled The Shamrock and the Maple Leaf, documenting the immigration of the Irish into Canada.  It's a visually interesting source that some Canadian blogger might want to make use of... 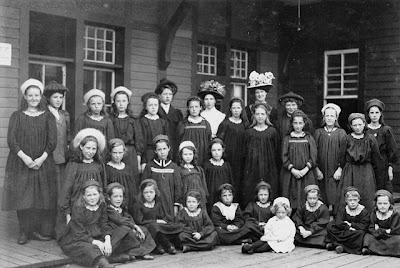