CIA operative lied to media re efficacy of waterboarding 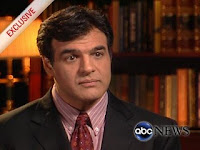 In December 2007, John Kiriakou told ABC News' Brian Ross in a televised and widely publicized interview that "senior al Qaeda commando Abu Zubaydah cracked after only one application of the face cloth and water." Now he admits he was lying.


The point was that it worked. And the pro-torture camp was quick to pick up on Kiriakou's claim.

"It works, is the bottom line," conservative talk show host Rush Limbaugh exclaimed on his radio show the day after Kiriakou's ABC interview. "Thirty to 35 seconds, and it works."

A cascade of similar acclamations followed, muffling -- to this day -- the later revelation that Zubaydah had in fact been waterboarded at least 83 times...

Now comes John Kiriakou, again, with a wholly different story. On the next-to-last page of a new memoir, The Reluctant Spy: My Secret Life in the CIA's War on Terror (written with Michael Ruby), Kiriakou now rather off handedly admits that he basically made it all up.

"What I told Brian Ross in late 2007 was wrong on a couple counts," he writes. "I suggested that Abu Zubaydah had lasted only thirty or thirty-five seconds during his waterboarding before he begged his interrogators to stop; after that, I said he opened up and gave the agency actionable intelligence."

"Now we know," Kiriakou goes on, "that Zubaydah was waterboarded eighty-three times in a single month, raising questions about how much useful information he actually supplied."