Origin of the term "stool pigeon" 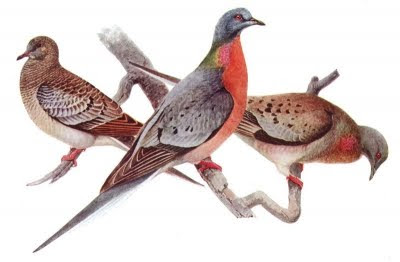 Passenger pigeons traveled in flocks of hundreds of millions, so thick that their passing eclipsed the sun. They descended en masse at the locations of nut and fruit trees. Audubon passed a roost site along the Green River in Kentucky: “I rode through it upwards of forty miles, and, crossing it in different parts, found its average breadth to be rather more than three miles… the dung lay several inches deep, covering the whole extent of the roosting place…The Pigeons, arriving by the thousands, alighted everywhere, one above another, until solid masses were formed on the branches all around.  Here and there perches gave way under the weight with a crash, and, falling to the ground, destroyed hundred of birds beneath, forcing down the dense groups with which every stick was loaded. It was a scene of uproar and confusion. I found it quite useless to speak, or even to shout to those persons who were nearest to me.”

“Audobon... came up with a figure of over 1 billion birds in a single flock that he watched near Louisville, Kentucky. A flock in Ontario thirty years later took several days to pass and was later estimated to contain nearly 4 billion individuals.”

The longest recorded nesting site was in central Wisconsin. In 1872 it formed an L shape, the long arm 75 miles long and the short one 50 miles long, with arm widths between six and eight miles.

The birds were destroyed with guns, clubs, and burning pots of sulphur.


“They were also trapped in the daytime in spring-loaded nets, drawn into range by a “stool pigeon,” a captured bird, often with its eyes sewn shut and tethered to a perch of “stool.”

It was made to flap its wings to attract the attention of a passing flock, and it was quite usual for each trapper to catch upward of five hundred birds in each release of the net and maybe five thousand birds in a day’s work.

(Notes and quotes from the book Paradise Found: Nature in America at the Time of Discovery, by Steve Nicholls (University of Chicago Press, 2009).  More re the book in the days to come.

Illustration from a Squidoo page devoted to the passenger pigeon.