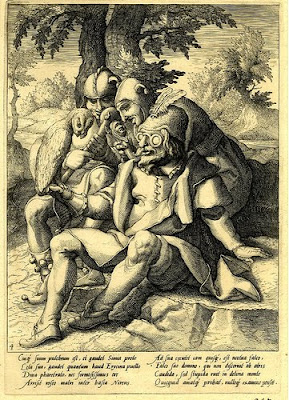 "Three fools sitting together, one has thick-rimmed glasses and has an owl perched on his wrist; first state with Latin text; unsigned; after Karel van Mander. c.1592."

Blogged as a reminder that eyeglasses go back much, much further than most of us realize.  Americans often think they were invented by Benjamin Franklin, whereas they really were created by Arab scientists in the ninth or tenth century.