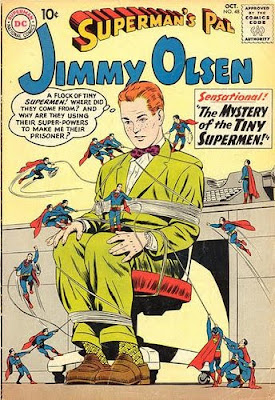 I have been considering writing a blog entry about "famous Lutherans" (figuring it would be a short post).  This past week while browsing the topic, I encountered a listing of the Religious Affiliation of Comic Book Characters.  In the unsurprisingly short list of Lutherans was Jimmy Olsen:


But despite the seemingly obvious identification of Jimmy Olsen as a Lutheran, and despite his having been featured in over six decades of stories, there exists little actual textual support within DC Comics canon for the identification of Jimmy Olsen as a Lutheran. Olsen has never been written as if his religious background was anything other than Lutheran, but the character has not been portrayed as a devout churchgoer nor is he known to have overtly stated his religious affiliation. Perhaps the best evidence for Olsen's Lutheran religious background or affiliation is influential Superman chronicler Elliot S! Maggin's identification of Olsen as a Lutheran. Maggin seems to have simply articulated what other writes have assumed about Olsen for decades, but it is arguable whether this can be considered "canon" (official DC Universe continuity).


For other comic book character affiliations, see this link.