Rare footage of one of the world's most strange and elusive mammals has been captured by scientists.

Large, and with a long, thin snout, the Hispaniolan solenodon resembles an overgrown shrew... Little is known about the creature, which is found in the Caribbean, but it is under threat from deforestation, hunting and introduced species...

"It is an amazing creature - it is one of the most evolutionary distinct mammals in the world.

"Along with the other species of solenodon, which is found in Cuba (Solenodon cubanus), it is the only living mammal that can actually inject venom into their prey through specialised teeth.

"The fossil record shows that some other now-extinct mammal groups also had so-called dental venom delivery systems. So this might have been a more general ancient mammalian characteristic that has been lost in most modern mammals, and is only retained in a couple of very ancient lineages."

The image embedded above (credit here) is a placeholder until I find a suitable photo of the solenodon's teeth. Here's the solenodon: 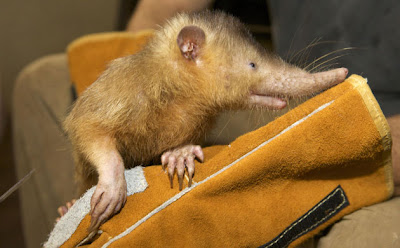