Succinctly described by the YouTuber as follows: "ok so i was just editing my latest montage and this huge spider came out, so i sprayed it and killed it, then this fricken alien worm came out of it!!!  haha thanks for watching! - baskwith"

It apparently is a parasitic roundworm.  I didn't know they infested creatures as small as spiders.  And I'm amazed that the spider could apparently function with so much of its body mass filled with the nematode (nematomorph - see Taupo's link in the Comments).

Addendum:  I've borrowed two videos from reader Taupo's blog.  The first shows a parasitized terrestrial insect (a cricket) seeking out water (a swimming pool) and jumping in.  After he's in the water, the parasite - a "Gordian worm" (Paragordius tricuspidatus) emerges, and the dead/dying host is left behind:

The second video depicts similar events, but includes a narration (French in the original, here overdubbed in English, perhaps by a third party?) -

It's absolutely fascinating that some parasites have evolved to modify the behavior of their hosts to their own advantage.  I remember seeing similar adaptations in parasites of ants and caterpillars, and I believe it is suspected with some parasites of humans, such as toxo.


These may be the first photos of a Horsehair or Gordian worm erupting from inside a Huntsman spider. The photos were taken by our good friend Andrew this week in Cairns, Australia.   The Huntsman was spotted inside Andrew’s house with an unusually enlarged abdomen.  It got sprayed with pesticide (no – we don’t condone that kind of activity here at insecthouse.co.uk!) and within seconds of it dying, this Horsehair worm emerged.  In the circumstances, the pesticide was probably an act of mercy, but still – tut tut. 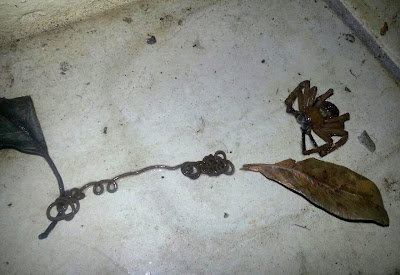 Horsehair worms are long, slender wormlike animals and can be between 5-200cm long!  They’re not worms, and nor are they nematodes, despite their scientific name of Nematomorpha (which means “nematode shaped”)... Horsehair worms are pretty tough customers – they can survive even if their host gets eaten.  Our unfortunate huntsman may have eaten an infected cricket or beetle and so become infected itself.

Further details about both creatures at Insect House.

*Reader AF suggests that the arthropod parasites could also be Mermithidae:


Mermithidae is a family of nematode worms that are endoparasites in arthropods. As early as 1877, Mermithidae was listed as one of nine subdivisions of the Nematoidea. Mermithidae are confusable with the horsehair worms of the phylum Nematomorpha that have a similar life history and appearance.