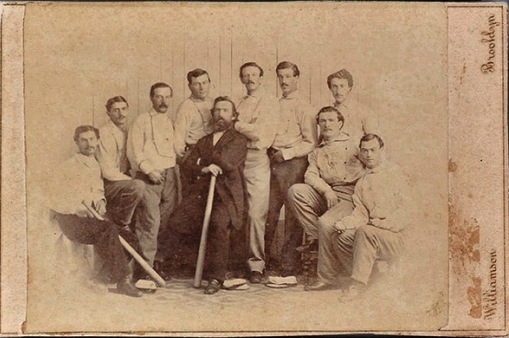 Who would ever have guessed that baseball cards were being manufactured during the Civil War?  I have previously blogged about an 1870 card of the Cincinnati Red Stockings, but now someone has found an 1865 card of the Brooklyn Atlantics:


A man found the card by chance in a photo album he bought while antique picking in the small town of Baileyville on the Canadian border, said Troy Thibodeau of Saco River Auction Co. in Biddeford.

It's not the same as a modern baseball card, which became commonplace beginning in the 1880s. Instead, it's an original photograph from 1865 of the Brooklyn Atlantics amateur baseball club mounted on a card. The card shows nine players gathered around their manager.

Thibodeau said he's aware of only two such cards in existence, the other at the Library of Congress. Putting a dollar-figure value on it is difficult, he said, but he expects it to fetch at least $100,000 at the Feb. 6 auction...

The Maine man bought the card by happenstance. While at a yard sale, he bought a photo album, old Coca-Cola bottles and a couple of oak chairs for less than $100, Thibodeau said.