From a report at New Scientist:


No backboned animal has been found that can harness the sun – until now. It has long been suspected, and now there is hard evidence: the spotted salamander is solar-powered.

Plants make food using photosynthesis, absorbing light to power a chemical reaction that converts carbon dioxide and water into glucose and releases oxygen. Corals profit from this reaction by housing photosynthetic algae inside their shells... 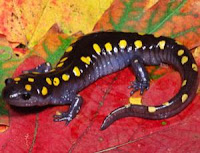 Spotted salamanders, too, are in a long-term relationship with photosynthetic algae. In 1888, biologist Henry Orr reported that their eggs often contain single-celled green algae called Oophila amblystomatis. The salamanders lay the eggs in pools of water, and the algae colonise them within hours...

Then in 2011 the story gained an additional twist. A close examination of the eggs revealed that some of the algae were living within the embryos themselves, and in some cases were actually inside embryonic cells. That suggested the embryos weren't just taking oxygen from the algae: they might be taking glucose too. In other words, the algae were acting as internal power stations, generating fuel for the salamanders.

To find out if that was happening, Erin Graham of Temple University in Philadelphia, Pennsylvania and colleagues incubated salamander eggs in water containing radioactive carbon-14. Algae take up the isotope in the form of carbon dioxide, producing radioactive glucose.

More at the link, including a hypothesis that the same process may occur in other species.  This gives me a better appreciation for the little salamanders that used to fall down our window well and basement stairs when I was a kid.