Retaining a sense of perspective 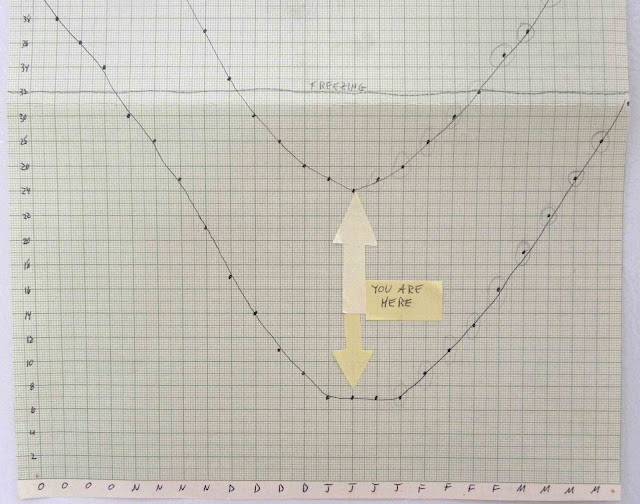 The graph above is attached to the side of our refrigerator with magnets.  It shows the historical average daytime high and low temperatures for our city (in degrees Fahrenheit) at weekly intervals from October through March.  The apparent shading is just a fold in the paper casting a shadow below; above that is the line indicating freezing (32 degrees).  The little arrows (made from the sticky end of Post-It notes) get moved along the graph each week.*

Those who live in more temperate or tropical climates probably can't understand why we put up with such bitterly cold weather.  Partly, of course, there are the stark economic realities of jobs and homes and families, but beyond that there's a certain quiet satisfaction that comes from living through cycles of four distinct seasons.  The first week in March crocuses will emerge right through residual snowdrifts (we've planted a hundred of them just because of that harbinger phenomenon).  A couple weeks later buds will appear on the trees and the lilacs will bloom, and suddenly the signs of new life are everywhere.

It doesn't surprise me that the earliest humans recorded winter solstices, that they monitored the sun's positions, that religious festivals were created to celebrate rebirth from apparent death.   There's an immense satisfaction in telling oneself that one has made it through the  most difficult time, and that things are now going to get better.

Those early peoples tracked these cycles by standing immense stones on end in open fields and on hilltops; we do it with yellow arrows made from Post-It notes on a refrigerator.  But the intention is the same, and we share their wonder at the phenomenon.

*It's interesting that the coldest week doesn't correspond to the darkest week of the winter solstice.  I believe I read somewhere that the discrepancy occurs because of the "thermal sink" properties of the earth and Great Lakes - just as the hottest days develop a couple weeks after the longest days.