Some final excerpts from Stephen E. Ambrose's Undaunted Courage: Meriwether Lewis, Thomas Jefferson, and the Opening of the American West.


“As a child, Meriwether absorbed a strong anti-British sentiment. This came naturally to any son of a patriot growing up during the war; it was reinforced by seeing a British raiding party led by Colonel Banastre Tarleton sweep through Albemarle in 1781.  Jefferson recorded: ‘He destroyed all my growing crops of corn and tobacco, he burned all my barns containing the same articles of last year, having first taken what he wanted; he used, as was to be expected, all my stocks of cattle, sheep and hogs for the sustenance of his army, and carried off all the horses capable of service; of those too young for service he cut the throats and he burned all the fences on the plantation, so as to leave it an absolute waste. He carried off also about 30 slaves.’ Tarleton also ordered all the county court records burned. This wanton act was roundly and rightly condemned...: ‘It is hard ot conceive any conduct in an army more outrageous, more opposed to the true spirit of civilization, and withal more useless in a military point of view, than the destruction of public archives.’” (24)

[During the Revolutionary War] “The journals of officers often read like tourist guides to taverns and scenery along the route, while enlisted men’s diaries recounted weeks of hunger and cold.” (40) 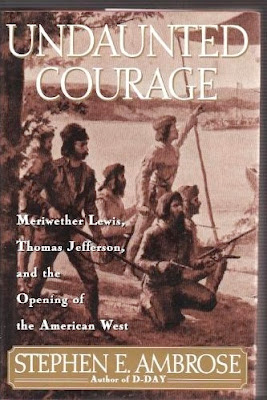 “When a private ran off from Fort Defiance in the fall of 1795, the officers offered two Shawnee Indians a reward of ten dollars for bringing him back alive and twenty dollars for his scalp.” (43)

[The Arikawa] "brought corn and squash and other welcome vegetables to the expedition, and quantities of a bean the Indians acquired by digging in the underground storage bins of the meadow mice.” (180)

“The next day, the Americans killed nine more buffalo. They ate only the tongues; the wolves got the rest.” (190)