Apparently that is a matter of some contention, as exemplified by the Wikipedia editors' discussion of the topic, some excerpts of which are below, via Harper's:

It is standard practice when determining usage to allow those whose logo it is to make such determinations. If The Beatles capitalize the “T,” then a capital T it is.

I have a MA in Modern English Language and am a former proofreader and copy editor and current music editor for Amazon.com. In my professional work we never capitalize the “the” in band names, never ever. 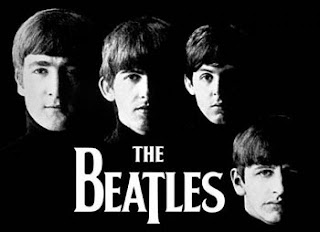 Never mind articles or websites. Just take a look at Ringo’s bass drum. At least HE knew what their name was!

From the band’s album covers, it’s not obvious that they considered the word “The” an essential part of their name. Note that the cover of Sgt. Pepper’s Lonely Hearts Club Band shows the band name as “BEATLES.”

This whole nonissue is a bunch of hairsplitting. While a few folks fastidiously change “the” to “The” when the word “Beatles” follows, REGARDLESS OF THE CONTEXT OR HOW MANY TIMES THE NAME HAS ALREADY BEEN MENTIONED AND/OR CAPITALIZED, this is not done with any other band. This is time- and space-wasting, not to mention a bit hypocritical.

Did someone ask for an expert in British English? I have had nineteen years in publishing and editing, and I have to agree with my American colleague above. And if the copy editors who worked on books are wrong, and if the Amazon.com editor is wrong, and if I am wrong, then why even seek the opinions of professionals here? Among professionals, it does appear the lowercase usage outnumbers the capitalized one; it is only among amateurs that the professional usage is slammed! So let the pros be wrong. In which case Ringo Starr’s site, which uses lowercase, must also be wrong. George doesn’t seem to mention it. John Lennon’s people must be wrong on their official site. Brian Epstein’s site is wrong. Only Paul McCartney capitalizes.

FWIW, Wikipedia does not capitalize "the."