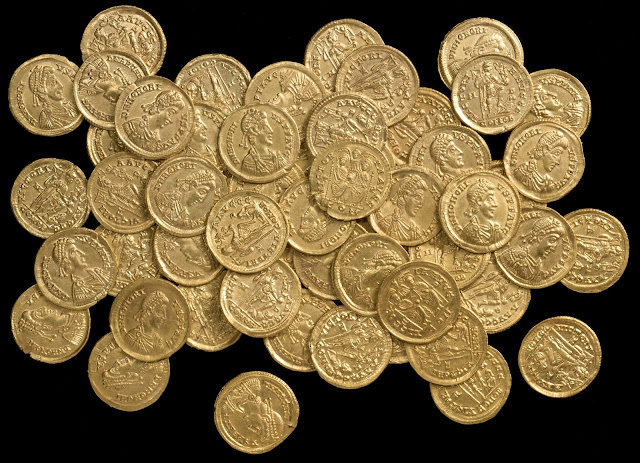 These were found by a man who bought a simple metal detector and explored a farm field...


All of them are 22-carat gold solidus coins struck in Milan (capital of the Western Empire from 286 A.D. to 402 A.D) and Ravenna (capital of the Western Empire from 402 A.D. until the collapse in 476 A.D.) in the late 4th century. The solidi bear the names and faces of the five different emperors who issued them: Gratian, Valentinian, Theodosius, Arcadius and Honorius, the last Roman emperor to rule Britain. They are in incredible condition. When I first saw a thumbnail of the find, I thought they were double eagles or some other relatively recent gold minting. The high resolution picture confirms that they look as fresh as the day they were struck... [click the embed to enlarge]

Their condition is particularly impressive considering that they’ve almost certainly encountered the business end of farming equipment. The woodland where the coins were discovered has been quarried and farmed over the past two centuries, which is probably why the coins were found scattered over the area instead of together in a container...

Solidi were not circulation coins. Here’s David Thorold, Prehistory to Medieval Curator at Verulamium Museum, on the subject:


“Gold solidi were extremely valuable coins and were not traded or exchanged on a regular basis. They would have been used for large transactions such as buying land or goods by the shipload. “The gold coins in the economy guaranteed the value of all the silver and especially the bronze coins in circulation. If you saved enough bronze, you could exchange it for a silver coin. If you saved enough silver, you could exchange it for a gold coin. However, most people would not have had regular access to them. Typically, the wealthy Roman elite, merchants or soldiers receiving bulk pay were the recipients.”

The local museum will then be given the opportunity to purchase the treasure at the assessed value, with all proceeds split between the finder and the landowner.

Click on the pic to enlarge.  There were 159 coins in the final tabulation.  It's no wonder that ancient peoples coveted gold, if not for its rarity, then for its ability to retain its luster and beauty for indefinite periods of time.

Found at The History Blog.