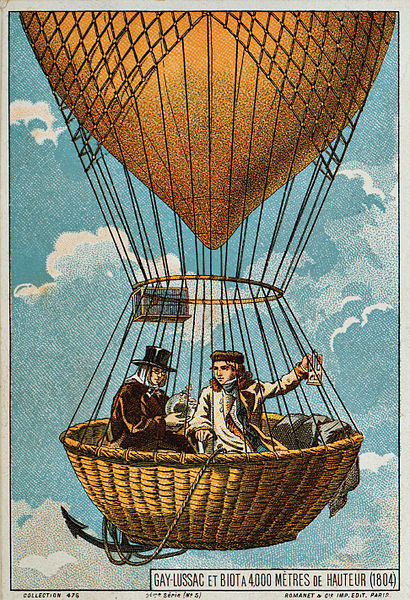 On an otherwise ordinary day in May 1808, two men of rather obscure backgrounds took part in an event that went down in history as one of the more bizarre tales of jealousy ever recorded. The two Frenchmen, Monsieur de Grandpre and Monsieur de Pique, quarreled over one Mademoiselle Tirevit, a dancer at the Imperial Opera... One of the fellows decided he did not wish to share Mademoiselle Tirevit's affections with the other strange bedfellow and so he challenged his rival to a duel...

One of them came up came up with the (absolutely brilliant) idea of dueling in hot air [sic] balloons. And so on the morning of May 3, 1808, a crowd gathered near the Tuileries to watch Monsieur de Grandpre and Monsieur de Pique conduct the first ever aerial dogfight...

When they reached about 2,000 feet, Monsiuer de Pique fired his blunderbuss (a muzzle-loading firearm with a short barrel). Sadly, (at least for de Pique and his unfortunate second), de Pique missed. Monsiuer De Grandpre then took aim and fired. His bullet ripped through the fragile skin of de Pique's balloon, causing it to collapse. The basket tipped and de Pique and his second fell headfirst to their deaths.

Text from Titillating Tidbits About the Life and Times of Marie Antoinette.  The image, via Wikipedia, is unrelated to the duel, but is of a contemporaneous balloon.

A Reddit thread about this duel has many comments re the unfortunate situation of the seconds, who apparently had to ascend with the duellists, and one of whom died.  Reddit also has a link to The British Newspaper Archive, which has a photocopy of the original report in the Northampton Mercury in 1808, and this salient response in the comment thread:


This event almost certainly occurred in GAS balloons, not hot air. In the early 1800s nearly all sport balloons relied on hydrogen or some other gas to provide lift. Yes, the very earliest balloon flights were in hot air balloons but within months after those first flights gas supplanted hot air as a much more practical lighter than air lift source. Hot air did not come back into fashion until the 1950s and 60s when modern lightweight synthetic fabrics and propane heaters made our current hot air balloons possible.

I have frequently read reports of 19th century balloons described as "hot air," when "gas" would have been the correct term.