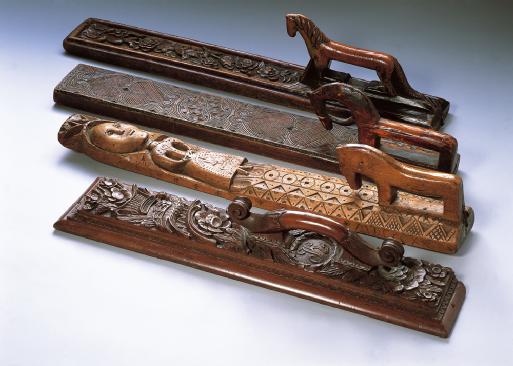 From the collections of the Horniman Museum and Gardens:


Mangle boards were originally used for ironing clothing, before being discarded for the flat iron. Mangles were widespread throughout Europe before the nineteenth century. When these mangles were collected by Frederick Horniman, they were still in use only in the Norwegian countryside. In the UK, they continued to be used in parts of Yorkshire, and also in Ireland. A mangle consisted of a long flat board, usually of fir tree wood, about two or three feet long, with a raised handle at one end... The underside of the mangle is completely smooth. A mangle board was used with a roller driven over the clothes until they were smooth.

A mangle board was considered an essential item for all young housewives. The carved mangle board was often a gift given to a new bride by her husband, who would carve and paint the mangle, placing her initials on the flat panel of the board. The carved motifs on Norwegian mangles use a combination of scroll, geometric and floral designs.

It's interesting that a word that today means to ruin, cut, destroy was once applied to a device for pressing clothes.  Probably some complex etymology there that I don't have time to pursue today.

Here's another, less elaborately carved mangle board, dated 1796 by the auction house: 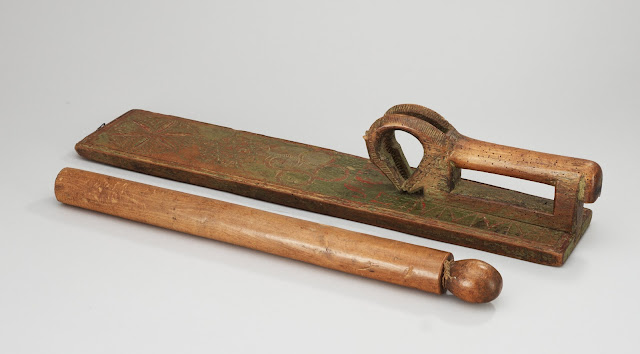 And finally, here's a modern one, decorated with rosemaling rather than carved, that was auctioned at Iowa's Vesterheim museum: 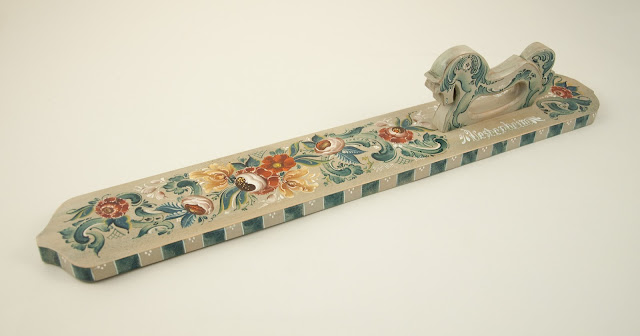