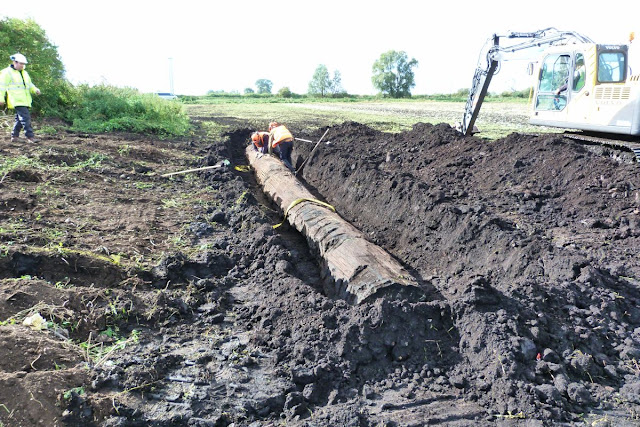 In February of this year, farmers G.S. Shropshire & Sons found a massive trunk of black bog oak thousands of years old in their field at Downham Market, Cambridgeshire, east England. The marshy Fenland area is known as a treasure trove of ancient timber which fell when sea levels rose starting around 7000 years ago. The fallen timbers were preserved in the silty water that would become peat. This trunk is 44 feet long and weighs five tons...

The finders alerted cabinet makers Adamson and Low, specialists in bog oak processing who purchase hundreds of logs a year from fenland farmers who turn them up while working their fields. Hamish Low recognized that the size and condition of this trunk made it exceptional, that as a remnant of the giant trees that once bristled in England’s forests this specimen should be saved for the nation instead of being made into small furniture pieces. 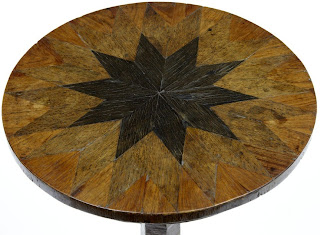 Besides, bog oak is beautiful and historical, but it’s first and foremost a carpentry wood, prized for centuries as England’s only native black timber. (The tannins in the oak react to iron in the subsoil to turn the wood dark brown or black.) Because the giant oaks were so much larger than they are today, bog oak wood has medullary rays far wider than in modern oak. That makes for a thick stripe grain that looks particularly gorgeous on quarter-sawn boards. Traditional drying methods couldn’t preserve it in thick pieces, so its main use was as inlay wood or in the making of smaller decorative or furniture items. It’s only in the past 20 years that drying technology has advanced enough to allow the preservation of substantial hunks of ancient wood.

Instead of processing this log into parquet-sized pieces, such as those for the table in the insert above, the finders decided that this one deserved special treatment:


He could go ahead and plank the trunk, but instead of dividing the planks into more easily dried boards, they would be kept in their 44-foot lengths. Once dried the planks would shrink, but they’d still be massive and could be used to make a giant table. That huge tabletop could then be exhibited as an example of and tribute to the arboreal giants that once dominated the English landscape. There isn’t a single piece of bog oak as such on public display in the UK. Here was the perfect opportunity to rectify that oversight...

That required specially-made equipment, extra funding, and the skills and muscles of 40 volunteers.  Some of the details are discussed in The History Blog.  The table was projected to be completed and publicly displayed in the summer of 2013.