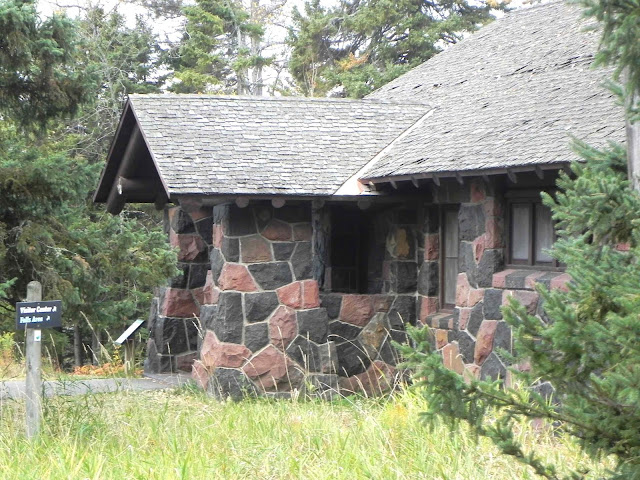 The last time I blogged about CCC stonework at Gooseberry Falls was in midsummer, when the falls themselves were spectacular and I only had time to document the massive stonework known as the "Castle."  During my October "blogcation" visit, the falls had dried to a trickle, so I was able to spend my time hiking to other locations.

Gooseberry Falls State Park is located on the North Shore of Lake Superior and because of the rugged scenery and spectacular falls became a major tourist attraction as early as the 1920s when automobile travel became increasingly available to the public. 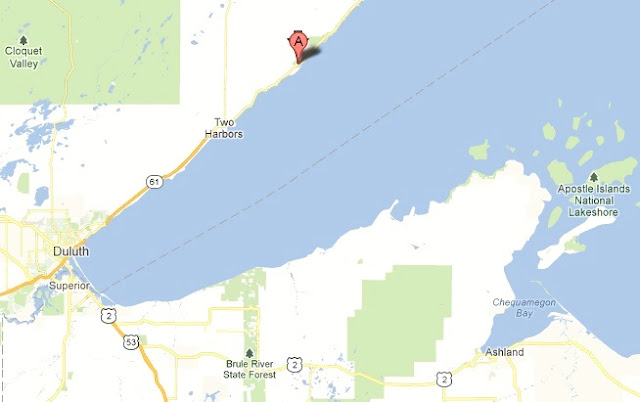 When the public works projects of the Civilian Conservation Corps were created, one major focus was creation and improvement of infrastructure at state and national parks. 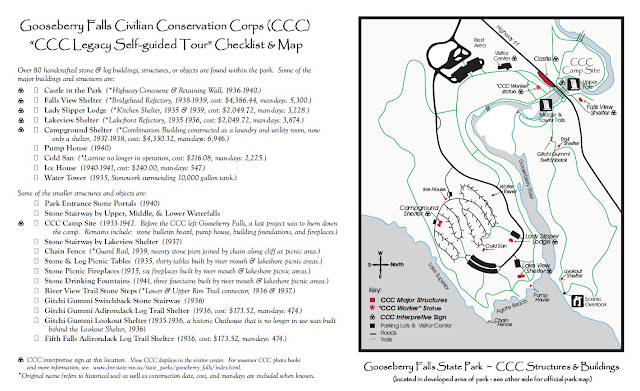 The image above, from a page in the Gooseberry Falls CCC Legacy self-guided tour guide, documents how many CCC projects are incorporated within the state park.  Today's post features the "Falls View Shelter" located on the north side of the bridge crossing the river.

When the park was first created, visitors pulled off to the side of Highway 61 at the "Castle" retaining wall/lookout site that I blogged last time, and here at the Visitor Center. 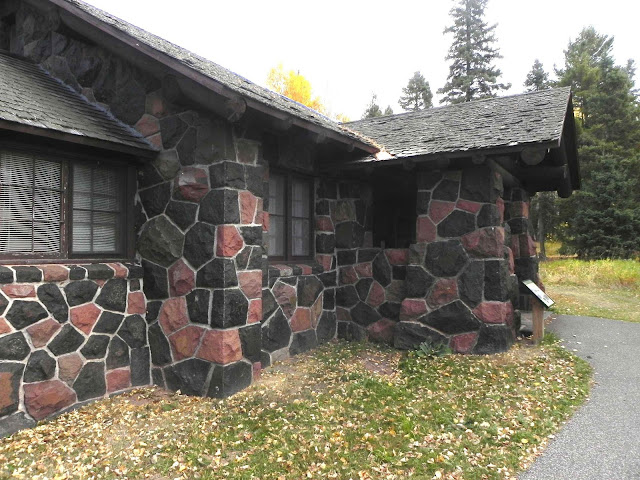 It was constructed in 1938-39 as the last stone construction in the park, requiring 5,300 man-days of labor and over $4,000 in cost of materials; it served as the "Bridgehead Refectory" where visitors could purchase a chocolate malt, sandwiches and refreshments, shop in a "Nature Store," and view exhibits in the Interpretive Center.  It served as the primary visitor center until the mid-1990s, when a large new center was built capable of handing the increasing throngs of tourists.  When I visited this building, I was the only human being in sight.  It's well-preserved as a historical landmark (there may be some administrative or storage function inside).

My interest, of course, was in the stonework - 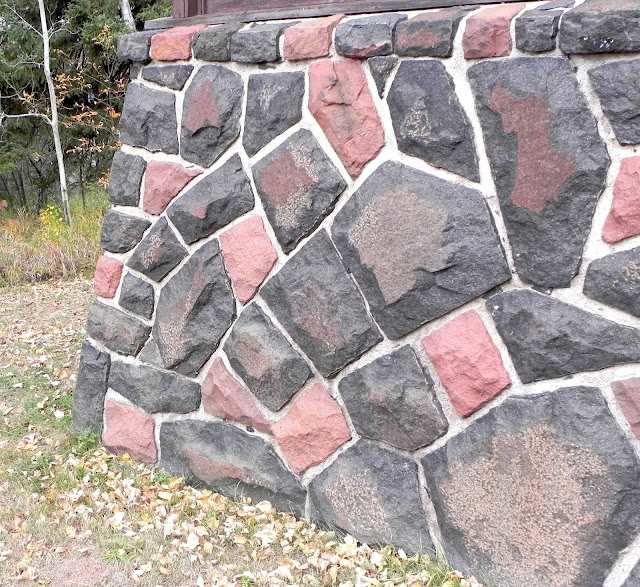 - which is magnificent in scale and craftsmanship, and to my eye beautiful in design.


Two Italian stone masons, John Berini and Joe Cattaneo, supervised the intricate stone work executed throughout the park using combinations of red, blue, brown and black granite. The red granite was quarried in Duluth near the College of St. Scholastica, while the darker variety was taken from an outcrop near East Beaver Bay, just north of the park. The sand for the mortar was brought from Flood Bay, south of the park, and logs were obtained at Cascade River State Park.

The professional stonemasons supervised a crew of about 20 boys and men brought from the soup kitchens of the Depression-era cities.  Some of them did the drilling and blasting of the rock at the quarries, others transported and hand-winched the rocks at the working sites, and the mason trainees cut the rocks to fit the needed spaces.

As with other CCC projects, local material was used, but the stones were transported a significant distance in order to take advantage of the varying colors and textures of the material.  A perfectly adequate building could have been constructed using just the black or blue stones, but the pride of a stonemason lies in creating beauty as well as functionality.

The masons liked to brag that the building would still stand even if all the mortar were gone.  I have no reason to doubt that - look at the thinness of the mortar separating the stones, which is even more evident in the next building. 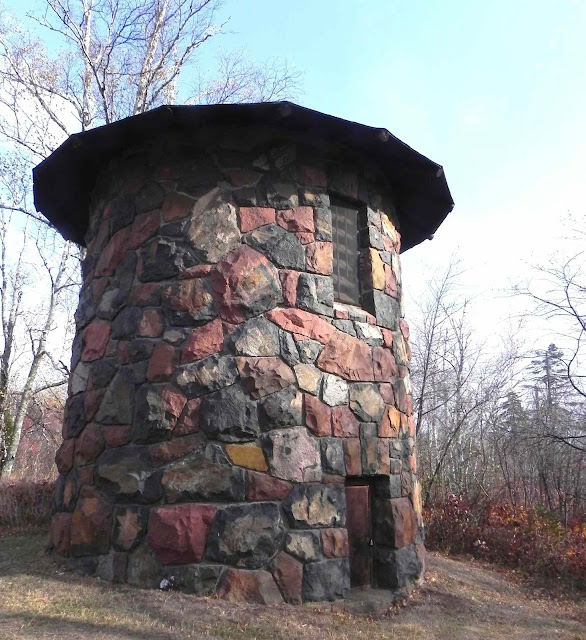 The "Water Tower" is located about halfway between the park entrance and the shore of Lake Superior, near the campgrounds.  It's a considerable hike from the upper falls, and I couldn't spend any time there because black storm clouds were rolling in and I was on foot.

But look at this stonework: 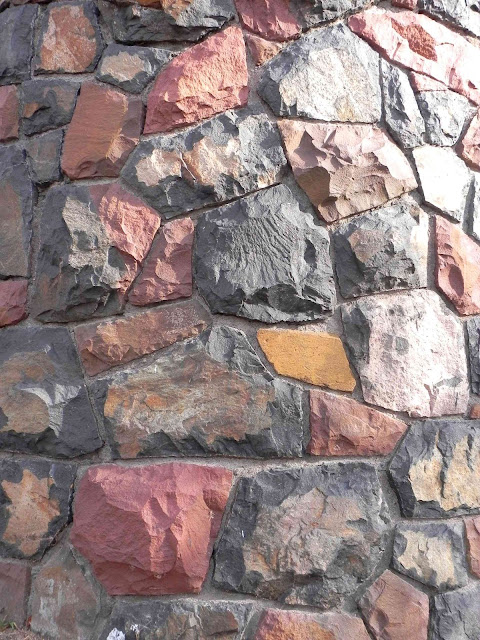 Again, the mix of colors - the yellow added as a whimsical accent - and the tightness of fit.  These blocks were hand-hewn on six or eight or ten faces to fit into a particular site, and on the outside face you can see the the chipping and hacking marks.  This is seriously impressive skilled work.

I hope to get back next summer to document the remaining buildings at the park.