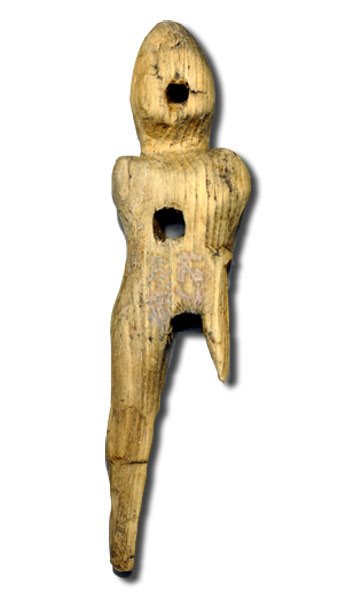 This artifact of ancient Inuit culture was excavated in the Hudson Bay area during a repatriation.


The first unusual thing we noticed were holes in the figurine’s head, chest, and pelvis. We were uncertain why these modifications, carefully created using a bow drill, had been made to an otherwise typical Inuit female figurine, so we examined the associated skeleton. We discovered skeletal abnormalities in locations corresponding with the holes in the figurine, the most obvious being a jaw lesion that was probably cancerous. While we can’t determine what kind of cancer the woman may have had, lung and salivary gland cancer (once known as Eskimoma because it is common in Inuit populations) are possibilities. The chest and pelvic perforations may relate to these soft tissue cancers or other skeletal problems. For instance, her pelvis was asymmetrical, suggesting misaligned bones that could have produced chronic pain in the buttocks.

Traditional Inuit religion conceived of everything—people, animals, objects, and places—as possessing an inua, or resident soul, and Inuit shamans sometimes made figurines called aarnguat (“object with powers”) to host an inua. We believe that this aarnguat was specifically made for the woman’s inua so that it could act as a proxy for her during a shamanic “surgery,” represented by the three drilled holes, to remove her illnesses. It is the first definitive archaeological evidence for shamanistic healing in the Canadian Arctic.

From the September/October 2010 issue of Archaeology.