Fake gold bars (and coins) made of tungsten 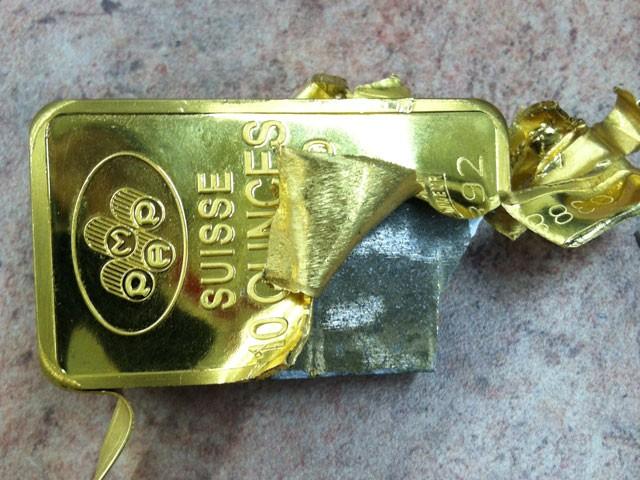 
Chemical engineer Ibrahim Fadl, who owns a business in Manhattan's Diamond District, strips away the outer layer of a 10-ounce bar of what he thought was pure gold, sold to him by a customer at his gold refinery business. The shell peels off like foil on a chocolate bar.

"It's got to be somebody really, really professional," said Fadl. "When I analyzed them, it showed they are tungsten." Tungsten is a metal used to make military weaponry, drilling equipment and even jewelry. Gold and tungsten have almost the exact same density, so a substitution of metals would be difficult to detect.


Ten ounce bars are thicker, making them harder to detect if counterfeited — the standard X-rays used by dealers don't penetrate deep enough. Plus, the bars had been sealed and numbered. So whoever did this must be running an extremely sophisticated operation, Fadl said.

This scam won't affect me, but you should check all of your gold bars right away.

I think the take-home lesson would extend to gold coins or other small gold pieces that the public is more likely to encounter.  Be suspicious of any "good deal" on pricing.  This excerpt from ZeroHedge:


In the aftermath of the recent stories about Tungsten-filled 10 ounce gold bars discovered in midtown Manhattan, there have been two broad sentiments expressed by the precious metals community: i) that this is as many have expected, and that of the physical inventory in circulation, much is fake (particularly that held in official hands, either via ETFs or in sovereign repositories which for various reasons still can not be publicly assayed) and ii) is the comfort that while it is relatively easy and cost-effective to use tungsten to falsify larger gold bars and bricks, those who own primarily gold coins are safe as for some reason, it is less economic, feasible or widespread to counterfeit smaller precious metal denominations. Sadly, while i) may be true, ii) is patently false. The proof comes courtesy of a firm called ChinaTungsten Online which proudly markets its broad "tungsten-alloy services" including, you guessed it, the gold plating of various tungsten formulations among them "gold" bricks, bars and, yes, coins. Oh did we mention a Chinese company openly advertizes its tungsten gold-plating and precious metals replication services, something which the tabloid media's CTRL-C/V majors openly mock as improbable conspiracy theory. Well, as they say, it is only conspiracy theory until it becomes conspiracy fact.