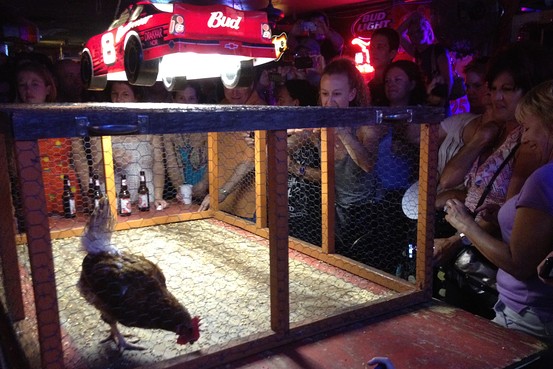 I'd call it a modern version of "alectryomancy" (an ancient form of divination in which the diviner observes a bird pecking at grain).  The Wall Street Journal explains:


It was a typical Sunday evening at Ginny's Little Longhorn Saloon and Bob Gelernter was enjoying the bar's weekly game of bingo...

This sport is known in polite company as chicken-poop bingo. Along with its cousin, cow-chip bingo, this twist on the church-hall pastime has proved that an age-old game of chance can cause quite a stir when it is centered on an animal. At least a few decades old, the chicken antics have become a popular staple at fairs, festivals and fundraisers in small-town America, and beyond.

It requires no particular genius to play. Here at Ginny's, an Austin institution that has been holding the game for a remarkable 11 years, players put up $2 to place a bet on a 54-number grid. Then Ginny Kalmbach, the saloon's 77-year-old proprietor, fetches a chicken from an outside pen, places it on a plywood-covered pool table and waits for nature to happen...

In Austin, Ginny's says it doesn't take any proceeds from its game. The Texas Lottery Commission doesn't bother to supervise it anyway; a spokeswoman there said it "doesn't meet our definition of bingo."..

The article includes the expected protest from a PETA representative:


"A crowded bar or stadium filled with a screaming audience is no more a proper place for a chicken than a factory farm," says Jane Dollinger, a spokeswoman for the Virginia-based PETA. "Human beings can come up with a method of entertainment less thoughtlessly exploitative."

More at the WSJ.  And one other tidbit about alectryomancy:


In another version, the observer tethers the bird in the center of a circle, around the perimeter of which is marked the alphabet, with a piece of grain at each letter. For each grain the bird pecks, the observer writes down the letter which that grain represents. The observer also replaces each grain as the bird eats it, so that letters may be repeated. The sequence of letters recorded will presumably contain a message. This form of divination is related to Ouija...