A man and his arthritic dog pay it forward 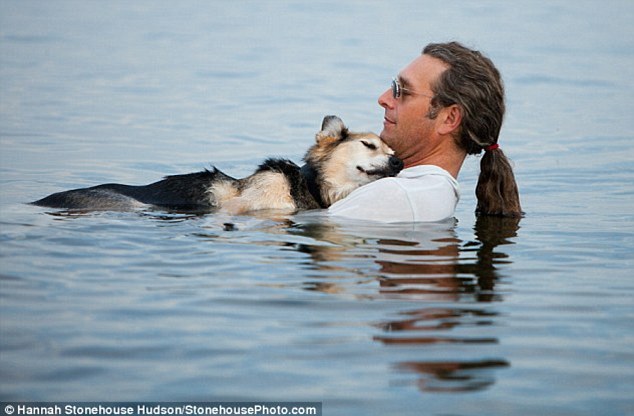 Excerpts from the report in the Daily Mail:


The stunning photograph of a man lulling his arthritic dog to sleep in Lake Superior has touched so many people that John Unger, 49, and his dog Schoep, 19, have started a foundation to help other dogs in need. The Schoep Legacy Foundation has raised more than $25,000 to help low-income families care for their aging dogs thanks to donations from people as far away as Saudi Arabia and Japan, all inspired by the gorgeous image.

Mr Unger's good friend Hannah Stonehouse Hudson, who is a professional photographer, captured the heartbreaking moment between the man and his aging rescue dog in Wisconsin when Mr Unger thought his best friend was at the end of his life. But thanks to the generosity of strangers, Schoep has been receiving top-notch care and is wagging his tail more than ever before, allowing Mr Unger and his dog more time together...

He was on the front line when the donations to Schoep's care came in, shocked by their magnitude. 'I've never seen anything like this before,' he said. 'We realized we had received more money than we would reasonably spend on Schoep's care.'

'The idea is to pay it forward; give it to other organizations, to help out other animals in the area and use the money in the spirit it was given,' Dr Haukass said. The $25,000 will be used in a variety of ways to help low-income families care for their animals, both in the care of older pets and the spaying and neutering of new pets.