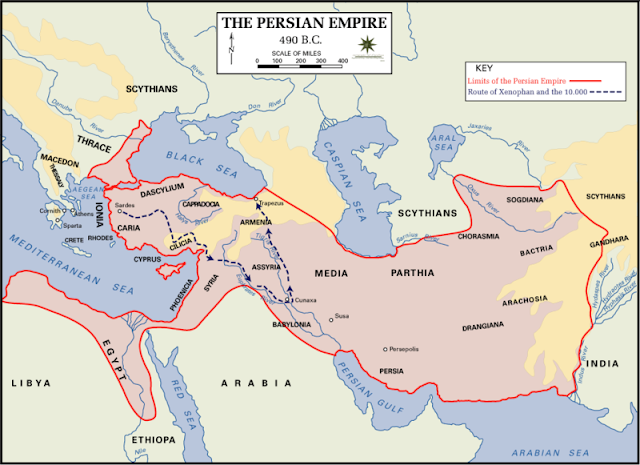 By ensuring peace and promoting trade, the Achaemenids ushered in an unprecedented period of prosperity in a vast area half a millennium before Rome reached the apex of its power. At its peak, the empire covered three million square miles—more than that of either Rome or the Chinese Han Dynasty at their largest in the first century A.D.

The taxes gathered from conquered peoples allowed the Achaemenids to create monumental cities, build dependable roads stretch­ing from Anatolia to Afghanistan, and construct caravan stops to protect and encourage merchants, as well as to ensure royal couriers could travel quickly across long dis­tances. The Royal Road, from Sardis in today’s Turkey to Susa in today’s Iran, provided regular way stations through territory “free from danger,” says the fifth-century b.c. Greek historian Herodotus.

From the September/October 2011 issue of Archaeology [online is not fulltext], via the author's website. [which is fulltext with photos].

And this from the Wikipedia entry:


In 480 BCE, it is estimated that 50 million people lived in the Achaemenid Empire or about 44% of the world's population at the time, making it the largest empire by population percentage.