First, the background re Saint Sebastian:


Saint Sebastian (died c. 288) was an early Christian saint and martyr, who is said to have been killed during the Roman emperor Diocletian's persecution of Christians... 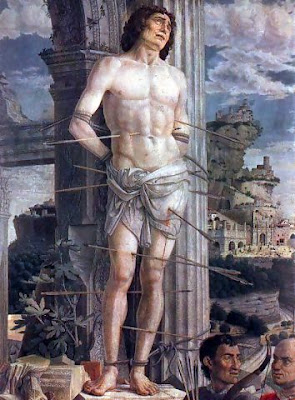 Diocletian reproached Sebastian for his supposed betrayal, and he commanded him to be led to a field and there to be bound to a stake to be shot at. "And the archers shot at him till he was as full of arrows as an urchin," leaving him there for dead. Miraculously, the arrows did not kill him. The widow of Castulus, Irene of Rome, went to retrieve his body to bury it, and found he was still alive. She brought him back to her house and nursed him back to health.

Sebastian then stood on a step and harangued Diocletian as he passed by; the emperor had him beaten to death and his body thrown into a privy. He is commonly depicted in art and literature tied to a post or tree and shot with arrows.

Next - Michael Richards, an African American sculptor of Jamaican and Costa Rican ancestry, who received his Master of Arts degree from NYU.  His sculpture in the top photo is described by The Black Art Depot Today:

His artistic talents won Michael Ricards a prestigious fellowship from the Lower Manhattan Arts Council.  This fellowship funded a “Studio in the Sky” in the World Trade Center. Michael Richards was working in this studio on 9/11 and died in the catastrophe.