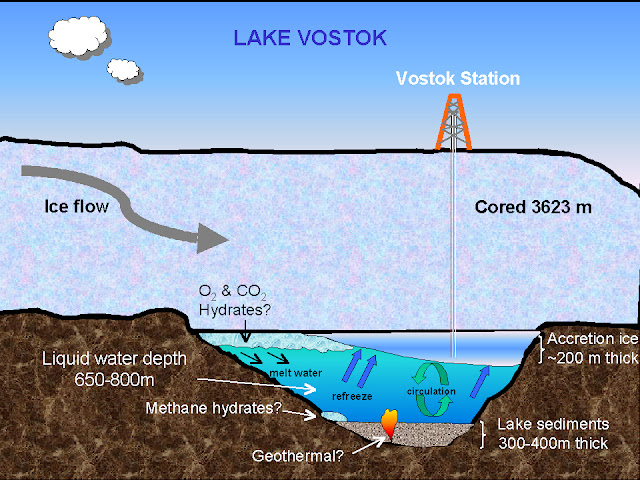 Ever since I learned the Russians were drilling into Lake Vostok, I've had a vague sense of unease that the procedure would be screwed up and the lake would be contaminated in the process.  I am now a little more reassured after reading an account cited at Wired about the precautions being taken:


Lake Vostok, which has been sealed off from the world for 14 million years, is about to be penetrated by a Russian drill bit.

The lake, which lies four kilometres below the icy surface of Antarctica, is unique in that it's been completely isolated from the other 150 subglacial lakes on the continent for such a long time. It's also oligotropic, meaning that it's supersaturated with oxygen -- levels of the element are 50 times higher than those found in most typical freshwater lakes.

"Once the lake is reached, the water pressure will push the working body and the drilling fluid upwards in the borehole, and then freeze again." The next season, the team will bore into that frozen water to recover a sample whose contents can then be analysed.

The drill bit currently sits less than 100 metres above the lake. Once it reaches 20-30 metres, the mechanical drill bit will be replaced with a thermal lance that's equipped with a camera...

The conditions in Lake Vostok are very similar to the conditions on Europa and Enceladus, so could also strengthen the case for extraterrestrial life.

More at the link and at New Scientist.  I have a family member who studies extremophiles and will be most interested in the results of the probe, but personally I like this Reddit comment: "What's 14 million years of divergent evolution in a lightless, freezing, high oxygen environment going to look like? I don't know, but I kinda hope it eats people."

Update January 28: A report at BBC indicates that "time is running out" for the Russian team because "With the Antarctic summer almost over, temperatures will soon begin to plummet; they can go as low as -80C." The drillers are within about 50m of the water, but are progressing slowly and will need to terminate operations by February 6. Details at the link.


If microbes are found in Vostok, the discovery would have particular significance for astrobiology, the search for life beyond Earth. That’s because Jupiter’s moon Europa and Saturn’s moon Enceladus have deep ice crusts that scientists think cover large amounts of liquid water warmed by sources other than the sun — just like Vostok...
Because of the stakes involved, the Russian effort has drawn criticism for its extensive use of kerosene, Freon and other chemicals to enable the drilling and to keep the borehole open during the long winter...

...the lake is part of a complex system in which ice sheets bring in meltwater at their bottoms and later carry refrozen water elsewhere. She said that although the lake has not “felt the wind” in 20 million to 30 million years, the water in it is not as ancient — in the 100,000s to low millions of years old. The only ancient water present, she said, is probably in the sediment at the bottom...

Vostok, which is about the size of New Jersey, is the world’s third-largest lake by volume of water. Priscu said the gas in the lake makes it like a can of carbonated soda: Open it under high pressure, and it will spurt out.

He said the doomsday scenario for the Russian breakthrough would be if the suddenly released water pushed its way past machinery to block it and shot up the borehole, which is six to eight inches in diameter at the top. The result, he said, could be an enormous geyser that could empty a quarter of the lake. Priscu said he didn’t expect that to happen, but if it did, the sudden addition of substantial water vapor to the antarctic atmosphere could change the continent’s weather in unpredictable ways.

See also "Ice volcanoes on a moon of Saturn."

I thought it was from The Onion, but it comes from FOX News, where the story begins thusly...


A group of Russian scientists plumbing the frozen Antarctic in search of a lake buried in ice for tens of millions of years have failed to respond to increasingly anxious U.S. colleagues -- and as the days creep by, the fate of the team remains unknown.

"No word from the ice for 5 days," Dr. John Priscu professor of Ecology at Montana State University, told FoxNews.com via email...

I suppose that means the creature is loose.  Stay tuned.


A first analysis of the ice that froze onto the drillbit used in last February’s landmark drilling to a pristine Antarctic lake shows no native microbes came up with the lake water, according to Sergey Bulat of Petersburg Nuclear Physics Institute (Russia). The very uppermost layer of Lake Vostok appears to be “lifeless” so far, says Bulat, but that doesn’t mean the rest of it is.

Bulat reported what he calls his team’s “very preliminary results” on Tuesday, at the 12th European Workshop on Astrobiology (ENEA 2012), in Stockholm, Sweden, at the AlbaNova University Center.

Bulat and his colleagues counted the microbes present in the ice sample and checked their genetic makeup to figure out the phylotypes. They counted fewer than 10 microbes/ml — about the same magnitude they would expect to find in the background in their clean room. And three of the four phylotypes they identified matched contaminants from the drilling oil, with the fourth unknown but also most likely from the lubricant.

They will nextbe testing "cleaner" water from deeper below the borehole (in May 2013).