It's not a coin that was familiar to me - a "silver center cent" - so I had to look it up (in fact, when I first saw the image, I thought the coin had been cored for jewelry and later repaired).  An old Yeoman "red book" from 1981 on my shelf barely mentioned it, and didn't price it.  But I did find good information at the Heritage Auction website: 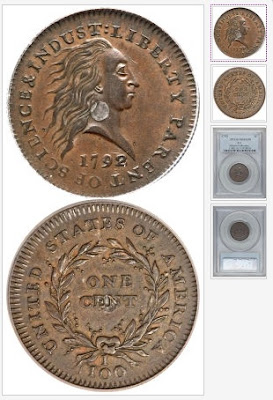 Just 12 days after Congress passed the Mint Act of April 2, 1792, President George Washington offered the position of Mint Director to David Rittenhouse, the well-known 18th century Philadelphia scientist and inventor... Section 9 of the Mint Act specified that cents were to contain 11 pennyweights of pure copper, equal to 264 grains (17.1069 grams). The theoretical planchet would be nearly identical in size to a double eagle of half a century later. Rittenhouse and others at the Mint quickly realized that the planchet size was impossibly high, and solutions were explored... Henry Voigt, who was recently appointed the Mint's Chief Coiner, suggested a combination of silver and copper, inserting a small silver plug in a copper planchet... The Silver Center cents (Judd-1) and the Fusible Alloy cents (Judd-2) permitted the one cent coin to be a manageable size...

"One objection to this mode of coining, strikes at first view; whether it might not be a temptation to counterfeit, by coining with studs of base white metal. Perhaps however, the silver saved in this way may not equal the expense of coining, and then the objection falls to the ground."

I find it interesting to note how much effort at the time went into making the intrinsic metal value of a coin equal to its intended commercial use.  Nowadays, of course, a coin is more of a "representation" of implied value, rather than intrinsically valuable.