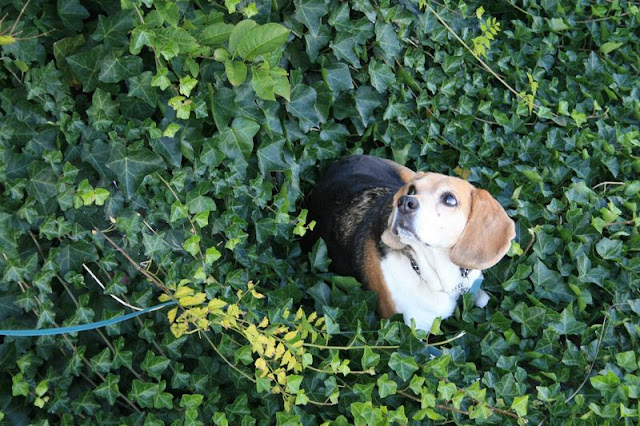 An article at American Scientist discusses the well-known co-evolution of humans and dogs, and adds this interesting hypothesis -


A study by Hiromi Kobayashi and Shiro Kohshima of the Tokyo Institute of Technology showed that modern humans are unique among extant primates in having highly visible white sclerae surrounding the colored irises of their eyes, as well as eyelids that expose much of the sclerae. In other primates, the dark sclerae, similarly colored skin and concealing eyelids tend to mask the direction in which the animal is looking, according to the Japanese team. In humans, the white sclerae and open eyelids make the direction of a person’s gaze visible from a distance, particularly if that glance is directed in a more or less horizontal direction. The changes in the human eye may be adaptations to enhance the effectiveness of the gaze signal. Michael Tomasello and colleagues at the Max Planck Institute for Evolutionary Anthropology in Leipzig, Germany, developed this idea as the “cooperative eye hypothesis.” They suggested that cooperation among humans was facilitated by the ability to recognize where others were looking...

Obviously, silent communication among humans would be advantageous for hunting in groups. But there is another skilled gaze-reader: the domestic dog.

A dog will follow the gaze of a videotaped human if the human first attracts the dog’s attention by speaking to it and looking at it, according to results published by Ernõ Téglás, of the Central European University in Budapest, Hungary, and his colleagues. Indeed, dogs perform as well as human infants at following the gaze of a speaker in tests in which the speaker’s head is held still.

Ádám Miklósi of Eötvös Loránd University in Budapest, Hungary, and his team tested dogs and wolves, and found that dogs were far more attentive to human faces than were wolves, even socialized wolves. Although wolves excel at some gaze-following tasks, perhaps suggesting a preadaptation for communicating with humans, dogs tend to look at human faces for cues and wolves do not. Miklósi’s team believes this major behavioral difference is the result of selective breeding during domestication.

Another way of looking at this phenomenon is that the white sclerae became universal among humans because it enabled them to communicate better not only with each other but also with dogs. Once dogs could read a human gaze signal, they would have been even more useful as hunting partners.

Via The Dish (whence the uncredited photo).