Fighting with a sword pommel 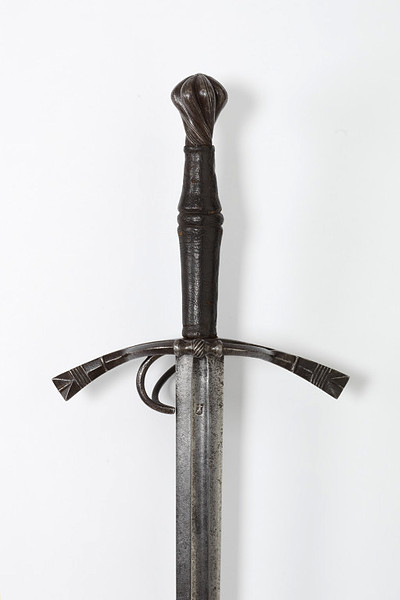 While researching "hammerhead" for the embroidery post, I encountered this interesting bit in the Victoria and Albert's description of a sixteenth-century "hand-and-a-half sword."


This ‘hand-and-a-half’ sword for use in foot combat carries an early sign of this development. Held either in one or both hands, and also known as a ‘bastard’ sword as its grip was not as long as a traditional two-handed sword, it can be dated to around 1500 based on the decoration of its hilt. The rounded ends of the crossbars (quillons) are quite flimsy while the finely chiselled pommel recalls the swirling lobes that decorated contemporary flagons and candlestick stems. This appearance demonstrates a move away from the brutal simplicity of the medieval sword.

No part of a medieval sword was made without both attack and defence in mind. Modern fencing encourages us to see the blade, in fact only the tip of the blade, as the sole attacking element of a sword and the hilt more as control room and protector. Tight rules prevent the sword hand ever straying from the hilt and the spare hand from getting involved at all. The fifteenth-century Fightbook published by the German fencing master, Hans Talhoffer, illustrates a more pragmatic approach as two fashionably dressed men settle their differences using undecorated swords with thick diamond-section blades. The blades could be gripped as well as the hilt. The rounded pommels at the end of the grip and at the ends to the quillons not only balanced the swing of the sword but acted as hammerheads to deliver the ‘murder-stroke’. As soon as these elements ceased to be functional they took on the role of adornment. This sword hints at the more decorative hilts produced later in the century.

An interesting addendum from a reader: "Interestingly, the word "pommel" is also the source of the bastardized "pummel", meaning to strike repeatedly. It has since come to mean to beat with the fists, but originally meant to strike with the pommel of a sword, which is gripped in one's fist."