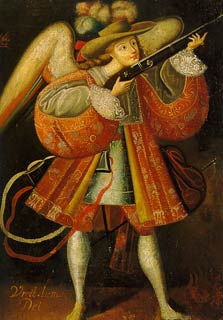 
An ángel arcabucero (arquebusier angel) is an angel depicted with an arquebus (an early muzzle-loaded firearm) instead of the traditional sword, dressed in clothing inspired by that of Spanish aristocrats. The style arose in the Viceroyalty of Peru in the second half of 17th century and was especially prevalent in the Cuzco School.

In his work Ángeles apócrifos de la América Virreinal (1992), Ramón Mujica Pinilla noted the link between ángeles arcabuceros and certain winged warriors from the pre-Hispanic pantheon. The good reception that these works found among indigenous people of the era may be due in part to the ease with which they could identify these winged warriors with their ancient gods and heroes.

According to Kelly Donahue-Wallace, the genre probably originated in the Collao region, near Lake Titicaca, and were actually based on Spanish and Dutch engravings. Some of these European prints depicted apocryphal archangels, condemned by the Church, but apocryphal motifs survived in the Andes. Another probable source for the angels' poses, corresponding to the military exercises of the period, were the engravings from the 1607 Exercise in Arms by Jacob de Gheyn II...

At the beginning of the 18th century, the demand for paintings from all corners of the Viceroyalty grew rapidly. Hundreds of Cusqueño paintings, many of which depicted ángeles arcabuceros, were shipped to Lima, Upper Peru, Chile, and northern Argentina. To satisfy this demand, large artistic workshops, mostly indigenous, were established. Today, paintings of ángeles arcabuceros are found in Peru, Bolivia, northern Argentina, and in various museums in Spain...

Text from Wikipedia.  I have no doubt that this explains the armed angel we discussed yesterday, attributed to and "18th-century unknown."  You learn something every day.