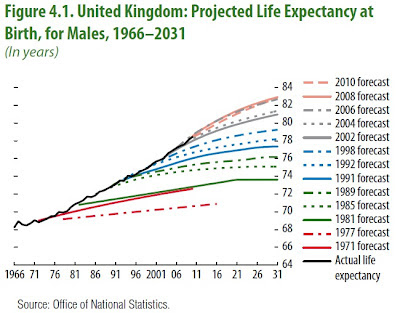 The black line shows actual values, compared to recent and older predictions.  Alterations in this curve profoundly affect retirement planning and the solvency of pension plans.


In fact, underestimation is widespread across countries: 20-year forecasts of longevity made in recent decades in Australia, Canada, Japan, New Zealand, and the United States have been too low by an average of 3 years. The systematic errors appear to arise from the assumption that currently observed rates of longevity improvement would slow down in the future. In reality, they have not slowed down, partly because medical advances, such as better treatments for cancer and HIV-AIDS, have continued to raise life expectancy ..."

The IMF asks what would happen if life expectancy by 2050 turns out to be three years longer than current projected in government and private retirement plans: "[I]f individuals live three years longer than expected--in line with underestimations in the past--the already large costs of aging could increase by another 50 percent, representing an additional cost of 50 percent of 2010 GDP in advanced economies and 25 percent of 2010 GDP in emerging economies. ...

From Conservable Economist, where there is some discussion of how to cope with these changes, via The Dish.