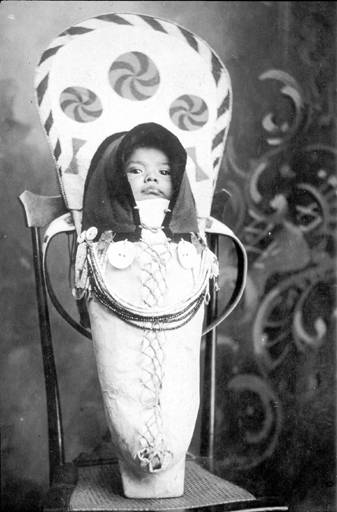 The photo, showing a Nez Perce baby in a cradleboard (with pinwheel motif, placed upright on a caned chair), comes from the digital collections of the University of Washington, via A Polar Bear's Tale.


Cradleboards are traditional protective baby-carriers used by many indigenous cultures in North America... used for the first few months of an infant's life, when a portable carrier for the baby is a necessity...

Cradleboards are built with a broad, firm protective frame for the infant's spine. A footrest is incorporated into the bottom of the cradleboard, as well as a rounded cover over the infant's head that arcs out from the cradleboard, similar to a canopy or a modern-day baby carriage hood... The Chippewa tradition was to make a lining for the cradleboard usually from moss growing in cranberry marshes, which is smoked over a fire to kill insects, then rubbed and pulled to soften it. In cold weather, the infant's feet may be wrapped in rabbit skin with the fur facing inward. The moss lining is surrounded by a birch bark tray insert placed into the cradleboard, which could be removed for cleaning...

In present-day South America, most indigenous cultures used slings or pouches, sometimes called a rebozo, for carrying infants rather than cradleboards... Cradleboard use and its effect on mother-infant interaction has been studied in Navajo communities. It has been shown that cradleboard use has no significant negative effect on infant development.* In the first few months of infancy, cradleboards have a soothing effect on babies.

*Addendum:  Reader Dora notes that "Studies of Native American Indians prior to the 1950s demonstrated a very high prevalence of hip dislocation in tribes that carried babies on a “cradle board” with the hips and knees strapped in an extended and adducted position."