Those who are appalled by photos of children picking through garbage piles in India, Asia, and South America would do well to remember that the same phenomenon was common in Britain as recently as the Victorian era (and in the U.S. during the 1930s).


Imagine living anywhere near this gray mountain of trash in the first year of Queen Victoria's reign. It's the "Great Dust-Heap at Kings Cross" as seen from Maiden Lane (now York Road), painted in 1837 by the watercolorist E. H. Dixon, surrounded by slum housing and adjacent to the Smallpox Hospital.... 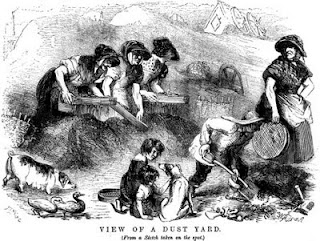 As for Kings Cross ... similar dustheaps featured in Charles Dickens's Our Mutual Friend (the "Golden Dustman" Noddy Bofﬁn is one of the writer's most indelible creations) and were the subject of "Dust, or Ugliness Redeemed," an essay by the poet R. H. Horne that appeared in Household Words, the weekly journal Dickens edited from 1850 to 1859. Horne vividly describes the underclass of "Searchers and Sorters" who scaled the debris and painstakingly raked through the refuse, separating animal and vegetable matter from broken pottery, bones, rags, metal, glass, and other detritus. Everything was sold off and recycled: coarse cinders were sold to brickmakers, bones to soapmakers, threadbare linen rags to papermakers. [Shown here: The sifting process at a dust-yard in nineteenth-century London; Mayhew, 1862.]

The Kings Cross dustheap pictured at the top of this post was packed up and shipped to Russia in 1848 when city developers decided to convert the site into what is now the Kings Cross railway terminus. The Russians mixed ash from the pile with local clay to make bricks that were used to rebuild their war-ravaged country.

Text and images via The Victorian Peeper.