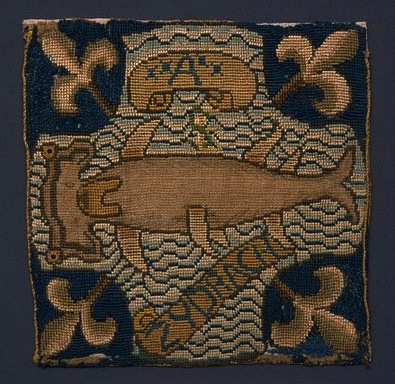 From the collections of the Victoria and Albert:


[A panel from] The Oxburgh Hangings. Hanging with applied panels of embroidery, formerly at Oxburgh Hall, Norfolk.

Mary Queen of Scots' troubled reign in Scotland ended in 1568 when the Scottish Lords forced her to flee across the border into England. As Elizabeth's cousin Mary had long claimed the English throne, leading Elizabeth to see Mary as a threat and place her in the custody of the Earl of Shrewsbury. Mary was held captive in various English country houses for 19 years. She was finally executed in 1587.

Mary Queen of Scots (1542-1587) embroidered these panels with Elizabeth Talbot, Countess of Shrewsbury (Bess of Hardwick) and ladies of the household, during her imprisonment. Mary may have intended the large central panel as a cushion for Philip Howard, Earl of Arundel (1557-1595), an English Catholic courtier imprisoned in London by Elizabeth I.

I was startled to learn that she was even aware of the existence of hammerhead sharks, much less that she would embroider one (reasonably accurately).

Via A London Salmagundi. (Image cropped and brightened from original).