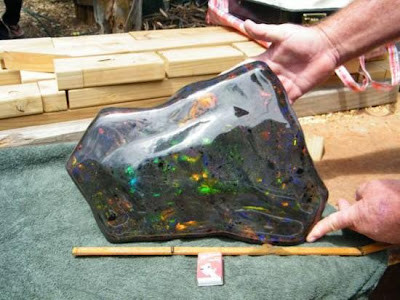 "The opal is about 30 cms in length with a height of 15-20 cms and a 4 cm thickness. Its estimated value is at least 1 million dollars USD... Historically, the largest opal found so far was just 6,100 carats in size. The current one is nearly ten times that size."

Photo and text via JustLuxe.  I often see opals at rock and mineral shows, but have never owned one or understood their geology, so I had to look up the details -


Matrix opals are a type of boulder opal and are found as part of a host rock, called Boulder ironstone.  They contain opal randomly distributed through the rock. The boulder ironstone with the precious opal inclusions are cut as one piece, giving an appearance similar to what you see when you look at the night sky, except that the ‘stars’ in this case are flecks of glories opal color.

Different types of matrix opals come from a variety of fields.  Boulder matrix comes from the Queensland fields in the northern part of the opal regions in Australia. There is another form of matrix opal from Andamooka in South Australia which is treated to give it a darker background. The specimen is soaked in sugar solution and boiled in acid, which causes carbon to get deposited in the spaces in the rock, giving it a dark or black opal appearance.

From Opalmine, which has pix of examples for sale.  Rock and mineral collecting has changed a lot since I was a kid in the 50s; nowadays much of what is available for purchase has been altered chemically or with heat or with radiation.  But with worldwide transportation much improved, there are now some amazing finds and products available.

Via the newsletter of the Madison Gem and Mineral Club.