The ongoing rape of our oceans

Excerpts from a report at the Center for Public Integrity:


Jack mackerel, rich in oily protein, is manna to a hungry planet, a staple in Africa. Elsewhere, people eat it unaware; much of it is reduced to feed for aquaculture and pigs. It can take more than 5 kilos of jack mackerel to raise a kilo of farmed salmon. Yet stocks have dropped from an estimated 30 million metric tons to less than 3 million in two decades. The world’s largest trawlers, after depleting other oceans, now head south toward the edge of Antarctica to compete for what is left...

Meantime, industrial fleets bound only by voluntary restraints compete in what amounts to a free-for-all in no man’s water at the bottom of the world. From 2006 through 2011, scientists estimate, jack mackerel stocks declined by 63 percent... 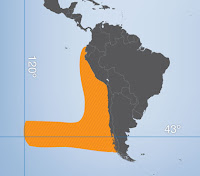 The U.N. Food and Agriculture Organization says that global fishing fleets “are 2.5 times larger than needed.” That estimate was based on a 1998 report; since then, fleets have expanded...

Chile now has only sardines in relative abundance, he said. “We have no more jack mackerel or hake or anchoveta. Fisheries that produced a million or more tons a year have simply run out from overfishing by big companies.”..

Album says government support has created so much capacity that super trawlers must fish to their maximum for return on investment. “These vessels roam the oceans for any available fish, causing overfishing and unbearable pressure on governments trying to manage resources,” he said.

More at the link, which is the third installment in a series entitled "Looting the Seas."