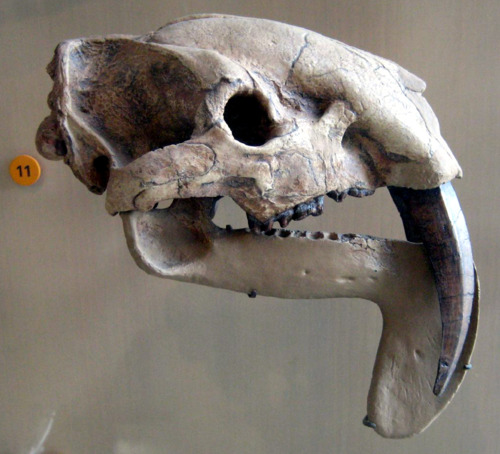 Thylacosmilus at first glance looks much like the famous Smilodon (sabertooth tiger)... This animal is very far removed from Smilodon, it is not even a placental mammal. It is a metatherian (marsupials are the living metatherians) more closely related to kangaroos, koalas, wombats, etc than to the saber-toothed tiger.

The similarity between Thylacosmilus and Smilodon is an excellent example of convergent evolution - two distantly relating forms converging upon a simular morphology and life habitat. There are an three other examples of mammals that have developed saber-teeth- in fact most of the last 65 million years had some large cat-like saber-toothed mammal present, the modern biota is the outlier.

Thylacosmilus went extinct roughly 3 million years ago, closely coinciding with the formation of the land bridge linking the Americas. Animals from North America emigrated south and those from South America journeyed north; this fauna exchange is referred to as the Great American Interchange. It is at this time we start to find Smilodon fossils in South America. It is thought that the arrival of this relatively larger predator (the largest Smilodon was twice the size of the largest Thylacosmilus) may have been what drove the only known marsupial saber-toothed form to extinction.

What puzzled me was that prominent flange angling downward on the front of the mandible (apparently serving to "protect the large canines", presumably from lateral blows).  But I'm not sure with the flange there how the saber-canines can penetrate the victim's flesh (?).

From Your Daily Fossil, via Fauna and A London Salmagundi.

Addendum: re the discussion in the comments re the function and efficacy of these saber teeth, here's a 3D rendering of the critter from The Alchemy Works (with a hat tip to Lady Aritê gunê Akasa): 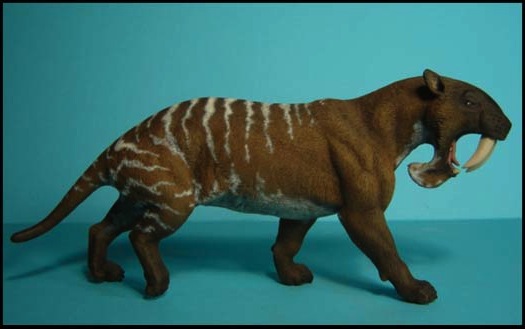