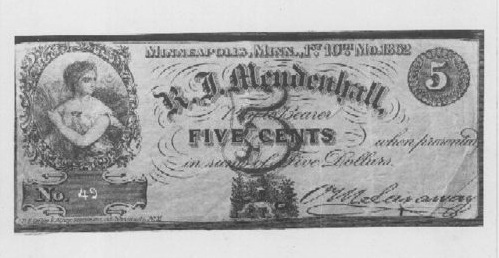 Found at the Hennepin County Library's tumblr, the above is -


- a type of emergency currency issued in the Northwest following the start of the Civil War. Issued at Minneapolis October 10th, 1862. Name of issuer is R.J.Mendenhall. Denomination is 5 cents.

Wikipedia has more on shinplasters, including a suggestion re the etymology -


According to the Oxford English Dictionary, the name comes from the quality of the paper, which was so cheap that with a bit of starch it could be used to make paper-mâché-like plasters to go under socks and warm shins.

- and a description of similar local currencies in Canada and Australia (where they were also called "calabashes)."


In some places they formed the core of a company shop economy (Truck system), circulating as private currencies. They were often of such low quality that they could not be hoarded, and shopkeepers off the property would not take them, as they would deteriorate into illegibility before they could be redeemed.

There are tales of unscrupulous shopkeepers and others baking or otherwise artificially aging their calabashes given as change to travelers so that they crumbled to uselessness before they could be redeemed.

"Truck system" - twice in one week.