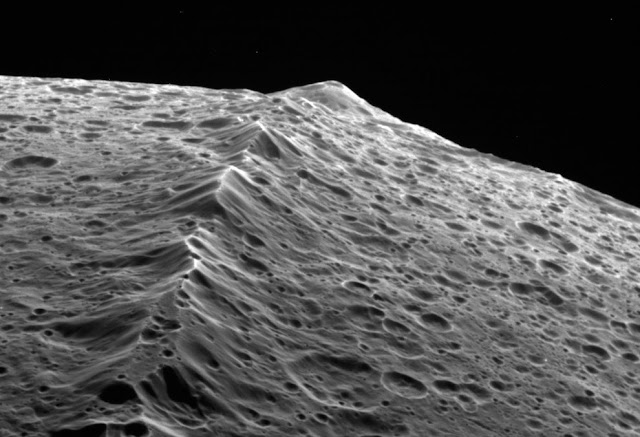 NASA's Cassini spacecraft is returning awesome photos of Saturn, its rings, and its moons, many of them assembled at Boston.com's Big Picture.

I was especially interested to see a closeup of Iapetus, the eighth moon, which has a circumferential ridge around its equator. The photo embedded above is from NASA in 2007. The photo below comes from what I'm sure everyone would consider a "wacko" website that suggests that Iapetus is an artificial (i.e. manufactured) moon.

Certainly the comparison with a Deathstar is striking - and that website is quite interesting (especially if you enjoy pondering conspiracy-theory-type improbabilities).

Whether or not the Iapetus stuff interests you, the rest of the photos from Cassini are truly impressive.

Update December 2010: When I originally posted this is May of 2009, that equatorial ridge around Iapetus was unexplained.  A new hypothesis suggests that this ridge comes not from deformational stresses within the moon, as previously postulated, but rather that it is the remnant of a collapsed ring of debris:


...we propose intact capture or accretion from a debris disk of a "sub-satellite" (possibly more than one) around Iapetus... Such a sub-satellite would be tidally drawn towards Iapetus, once Iapetus is sufficiently despun by tidal interaction with Saturn... Once deep inside the Roche limit, tides would then tear the sub-satellite apart. The resulting debris would collisionally evolve to the equatorial plane, dissipating orbital energy and ultimately raining down on the equator (deorbiting) at subsonic speeds... Assuming the density of ice and a high porosity, rubble-pile structure, all the mass in the ridge can be supplied by a sub-satellite ~100 km in radius, a size relative to Iapetus far smaller than the relative sizes of the Moon to the Earth or Charon to Pluto...

That's from the abstract at the American Geophysical Union meeting.  A BBC summary is here.

Reposted in 2011 to accompany even better photos of Iapetus in an adjacent post.