Inhaled creosote as a medicine 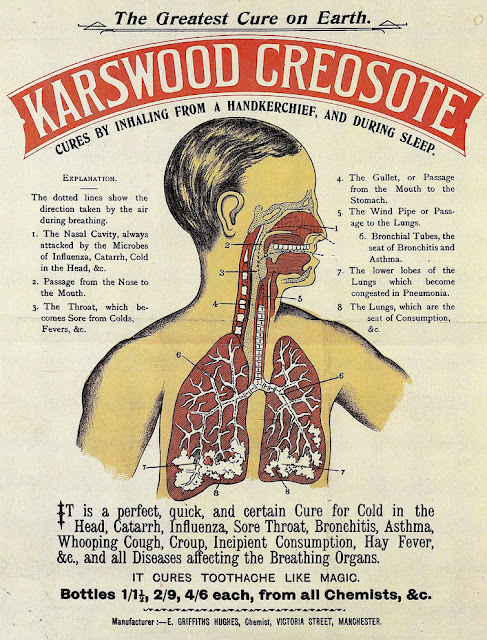 This vintage advertisement is from 1898.  The schematic shows bronchiectasis in the base of both lungs.

Creosote, which we think of as something to soak railroad ties in, has a long history:


It is produced in some quantities from the burning of wood and coal in blast furnaces and fireplaces; commonly found inside chimney flues when the wood or coal burns incompletely, producing soot and tarry smoke, and is the compound responsible for the preservation and the flavor of meat in the process of smoking.

It starts off being used as a meat preservative:


Soon after it was discovered and recognized as the principle of meat smoking, wood-tar creosote became used as a replacement for the process. Several methods were used to apply the creosote. One was to dip the meat in pyroligneous acid or a water of diluted creosote... and within one hour the meat would have the same quality of that of traditionally smoked preparations... Another was to place the meat in a closed box, and place with it a few drops of creosote in a small bottle. Because of the volatility of the creosote, the atmosphere was filled with a vapor containing it, and it would cover the flesh...

Medical usage dates back to before the compound was isolated:


During antiquity, pitches and resins were used commonly as medicines. Pliny mentions a variety of tar-like substances being used as medicine... Given this history, and the anti-septic properties known to creosote, it became popular among physicians in the 19th century. A dilution of creosote in water was sold in pharmacies as Aqua creosoti...

And re the lungs:


Creosote was suggested as a treatment for tuberculosis by Reichenbach as soon as 1833... Following that, that was a period of experimentation of different techniques and chemicals using creosote in tuberculosis, which lasted until about 1910, when radiation therapy looked to be a more promising treatment... Guaiacol, instead of a full creosote solution, was suggested by Hermann Sahli in 1887; he argued it had the active chemical of creosote and had the advantage of being of definite composition, and with less of a less unpleasant taste and odor...

Never heard of guaiacol?  A derivative product is advertised on television every day:


The guaifenesin... is still commonly used today as an expectorant, sold over the counter, and usually taken by mouth to assist the bringing up of phlegm from the airways in acute respiratory tract infections. Guaifenesin is a component of Mucinex, Robitussin DAC, Cheratussin DAC, Robitussin AC, Cheratussin AC, Benylin, DayQuil Mucous Control, Meltus, and Bidex 400.

As Paul Harvey once famously said:  "And now, you know the rest of the story."