From the Los Angeles Times:


Prosecutors and defense attorneys in the court-martial of Staff Sgt. Frank Wuterich, accused in the killing of 24 unarmed Iraqis in 2005, announced an agreement Monday to settle the case.  Wuterich will plead guilty to a single count of negligent dereliction of duty. Other charges were dropped. No announcement was made on what kind of discharge Wuterich would receive... 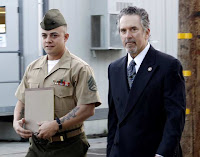 Wuterich, 31, was accused of manslaughter, assault and dereliction of duty for allegedly leading his squad on a bloody rampage on the morning of Nov. 19, 2005, after a roadside bomb killed one Marine and injured two in the Euphrates River town of Haditha.

When the smoke cleared, Wuterich's squad had killed 24 Iraqis, including three women and seven children, in a fruitless effort to find the gunmen that the Marines believed was firing on them from a house near the bomb blast.

Wuterich's case is the last to be settled among the eight Marines accused in the killings: four enlisted Marines accused of firing the fatal shots and four officers accused of not investigating thoroughly. Six cases were dropped, one officer was acquitted at court-martial...

The hearing officer at Wuterich's preliminary hearing in 2007 predicted the prosecution would fail because of inconsistent testimony from witnesses and poor forensics.

The maximum sentence is three months in the brig.