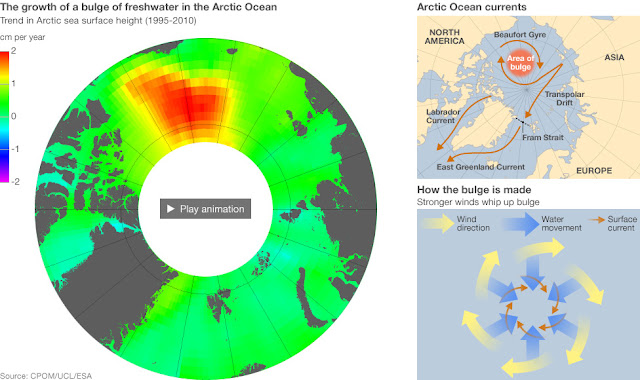 As reported by Nature Geoscience and summarized by the BBC:


UK scientists have detected a huge dome of freshwater that is developing in the western Arctic Ocean. The bulge is some 8,000 cubic km in size and has risen by about 15cm since 2002. The team thinks it may be the result of strong winds whipping up a great clockwise current in the northern polar region called the Beaufort Gyre...

Dr Giles and colleagues made their discovery using radar satellites belonging to the European Space Agency (Esa). These spacecraft can measure sea-surface height even when there is widespread ice cover because they are adept at picking out the cracks, or leads, that frequently appear in the frozen floes. The data (1995-2010) indicates a significant swelling of water in the Beaufort Gyre, particularly since the early part of the 2000s. The rising trend has been running at 2cm per year...

If the freshwater were to enter the North Atlantic in large volumes, the concern would be that it might disturb the currents that have such a great influence on European weather patterns. These currents draw warm waters up from the tropics, maintaining milder temperatures in winter than would ordinarily be expected at northern European latitudes.

The embed above is a screencap; to view the animation, go to the BBC link.  The animation ends with this graph of the change over time - 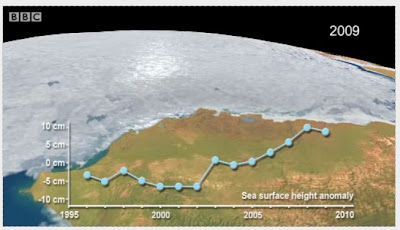