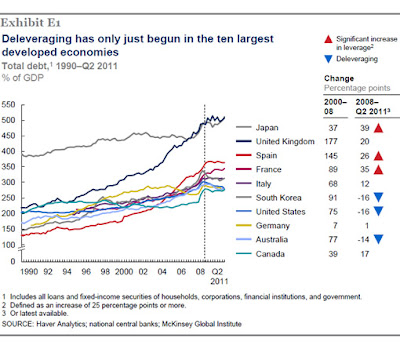 The graph above shows two decades of the trending of debt in ten countries.  Some will be surprised to note that the U.S. is not the top blue line - that's the United Kingdom !  And while the U.S. has started to "deleverage" since the 2008 crisis, for other countries the line is still rising. 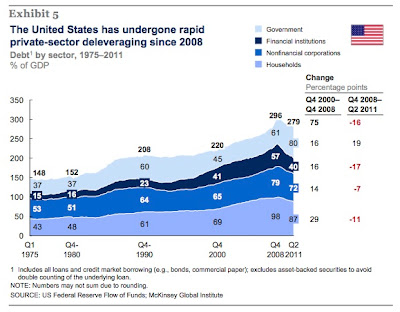 Also of interest to me was this second graph, which breaks total national debt into its component parts.  In the U.S. since 2008, financial institutions have reduced their debt by 17%, household debt has fallen 11%, and corporate debt is down 7%.  Only government (presumably fed+state+local) debt has risen.  It may be that the latter has been necessary in order for the former three to be facilitated; I don't understand economics well enough to comment on that.  But I do think these two graphs are important.

Graphs from a report by the McKinsey Global Institute, via The Telegraph.  There are more graphs and discussion at both links.