Word for the day: Rhyton 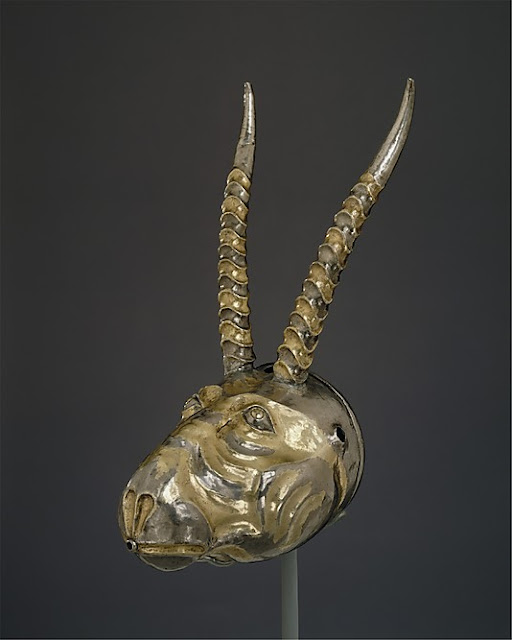 A rhyton is an elaborate drinking vessel, common in ancient Persia and later popularized in Greece:


The word is believed to be derived from Greek rhein*, "to flow".... Many vessels considered rhytons featured a wide mouth at the top and a hole through a conical constriction at the bottom from which the fluid ran. The idea is that one scooped wine or water from a storage vessel or similar source, held it up, unstoppered the hole with one's thumb, and let the fluid run into the mouth (or onto the ground in libation) in the same way wine is drunk from a wineskin today.


They are often shaped like an animal head or horn and can be very ornate and compounded with precious metals and stones. In Minoan Crete, silver and gold bulls' heads... seemed particularly common...

Not all rhyta were so valuable; many were simply decorated conical cups in ceramic. It is also likely that in shepherding cultures, the primary material for rhyta was animal horn; this cannot be substantiated, however...  Chusid speculates that Biblical Israelites used ram's horn (shofar) for both sounding purposes and for drinking...

A Google image search shows a wide variety of examples, and the topic of drinking horns is of course closely related.

The photo is of a 5th-6th century rhyton "in the form of a Saiga antelope head," found in Poland, from the collections of the Metropolitan Museum of Art, via A London Salmagundi.

*yes, I had the same question.  Apparently the Rhine river's name is from a different derivation.