This is a radioactive tissue holder

The incident is all over the news today, so it's not a "TYWK," but I found several aspects interesting.  As reported by the Washington Post: 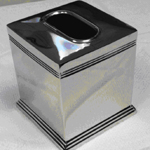 Metal tissue holders contaminated with low levels of radioactive material may have been distributed to Bed, Bath & Beyond stores in more than 20 states including New York, federal regulators said Thursday...

The problem is described as a rather minor one -


“If someone has one of these, they could receive a small radiation dose from it,” he said. For example, he said someone keeping one of the boxes on a vanity in the bathroom and spending about 30 minutes a day near it for a year would receive the equivalent of a couple of chest x-rays..."

The curmudgeon in us wants to point out that if you kept it next to your bed rather than in your bathroom, you would be exposed for 8 hours a day and thus get the equivalent of perhaps 32 xrays per year.  But it's not really that much radiation.  Only enough to do this -


The contamination was first discovered in California when two packages bound for Bed, Bath & Beyond stores in Santa Clara and San Jose containing four tissue holders triggered radiation alarms at truck scales, according to a Jan. 6 report posted on the NRC website.

I wouldn't worry about it.