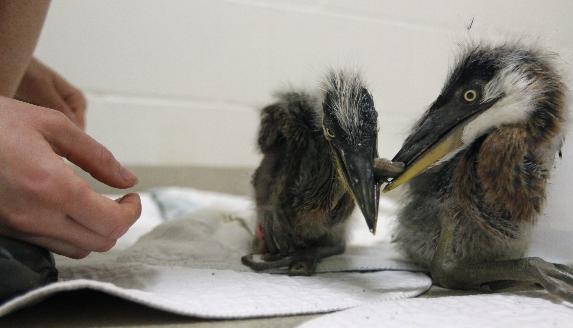 At the Wildlife Rehabilitation Center of Minnesota, avian nursery coordinator Jessika Madison helped feed the nine blue heron chicks that were orphaned by the Tornado that hit Minneapolis on Sunday. The chicks have to be fed live minnows every 30/45 minutes...

As many as 180 great blue herons were killed, injured or are missing after Sunday's tornado that struck north Minneapolis. The birds were nesting on an island in the Mississippi River near North Mississippi Regional Park. The island had been home to three dozen heron nests, each of which would likely have held three eggs or hatchlings and would have been tended by a pair of adult herons.

All of those nests were destroyed by the storm and only a few of the estimated 50 trees remain standing on the island. Adult herons were seen flying circles around the mangled island or sitting on broken trees.

Further details (and more photos) at the StarTribune.

Photo: Richard Tsong-Taatarii [I'm impressed at the large head/beak on the small chick]