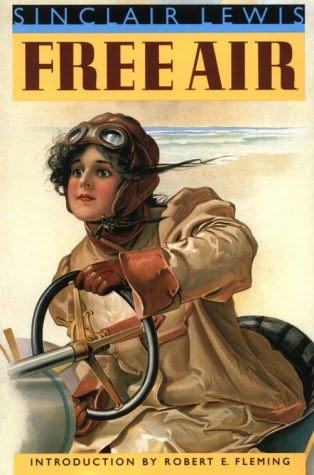 
The Sagebrush Tourists made camp; covered the hood with a quilt from which the cotton was oozing; brought out the wash-boiler, did a washing, had dinner, sang about the fire; granther and the youngest baby gamboling together, while the limousinvalids, insulated from life by plate glass, preserved by their steady forty an hour from the commonness of seeing anything along the road, looked out at the campers for a second, sniffed, rolled on, wearily wondering whether they would find a good hotel that night - and why the deuce they hadn't come by train. (p. 120)

"Free Air" was written by Sinclair Lewis shortly before he gained fame with Main Street, Babbit, and Arrowsmith.  I'm about halfway through, and it won't make my recommended books category, but it's a charming enough story about a cross-country road trip at the dawn of the automobile era.  I wanted to highlight this one word - "granther."

From the context, it seems to be a contraction of "gran(dfa)ther" or "gran(dmo)ther," but it's not listed in my Random House (or OED) dictionaries.  The Urban Dictionary lists  two quite different modern uses:

A Google search shows some usage of the word as a proper first name, but I can't track down much other information.  Since Lewis used another seemingly portmanteau word - limousinvalid - in the same paragraph to express his obvious contempt for the upper class, I'm reasonably confident that "granther" was similarly constructed as a slang word of the era, though it's not in the Online Slang Dictionary.  Perhaps it was a regional term.
Any suggestions?