How the "penny farthing" got its name 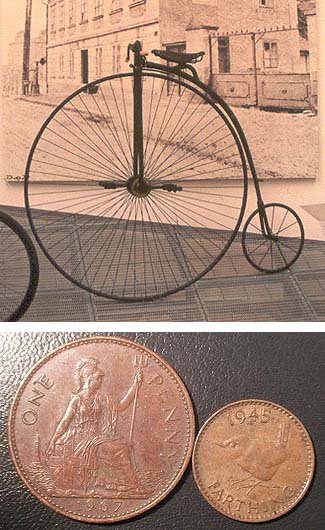 
The Michaux bicycle, whose name in France was velocipède, while in the USA the eloquent boneshaker, was further improved in by Eugène Meyer in France and James Starley in Britain. As a result, by the 1870s they created the well-known velocipede which had wire-spoke tension wheels instead of wooden spokes, and pneumatic rubber tires instead of iron, and whose front wheel was much higher, for the sake of speed, than the rear ones, and so it is called “penny-farthing” in the literature on after the proportion of the contemporary British coins. Starley’s nephew, John Kemp Starley will be the one who in 1885 would create the prototype of a rear-wheel-drive, chain-driven cycle with two similar-sized wheels, known as „safety bicycle”, thus reaching the height of the knowledge of the Knights of the Sun and the Moon – but this is already another story.

Much MUCH more at the link with lots and LOTS of interesting photos.  A must read for bicycle enthusiasts.